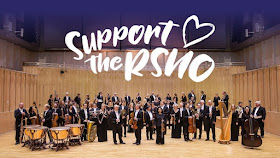 First performed at The Royal Glasgow Concert Hall in May 2016, this was an online recording of that concert made available to watch for one week on the Royal Scottish National Orchestra's Youtube channel.

This concert was conducted by Peter Oundjian, and comprised two very contrasting works.

Opening with a 10 minute piece by contemporary composer Lillie Harris, and receiving its world premiere performance at the time, it was the highly modern 'Remiscipate'. Harris graduated from the Royal College of Music in 2016, and for this piece combined her musical ideas of the two words "reminisce" and "dissipate". Basically, she explains, "the piece has two main personalities; a literal moving dust-cloud, and an ephemeral cloud of memories." Inspired by the destruction of the Red Road flats in Glasgow in 2015, the piece is an effective and expressive musical "remiscipation" of that event. A large sonic explosion followed by a musical exploration of the rubble and the memories contained within.

The concert continued with Richard Strauss' "Four Last songs" which were composed in the late 1940s, but had their premiere in 1950 at the Royal Albert Hall in London, the year after the death of Strauss and just 9 days' after his wife's passing. The pieces are written for soprano and orchestra and take their texts from the poems of Eichenorff.

Strauss was saddened and disheartened by the Nazis and the tretament of many of his relatives. He had Jewish friends and family and saw many of them taken to camps or executed. He exiled himself in Switzrland, and when he did begin to start composing again, it wasn't to operas which he turned. His close friendship with Wagner and opera was well-known, but instead to songs. These Four Last songs are hugely autobiographical in intent and very personal. They are undoubtedly about and for his wife, Pauline (represented by the soprano voice), whilst the predominent parts for horn and violin throughout represent his father (horn) and himself (violin). Firmly fixed in the late Romantic / early 20th century style, the pieces are also rather backward-looking musically too. Fitting and appropriate. The four songs are "Fruehling" (Spring), "September", "Beim Schlafengehen" (On Falling Asleep), and "In Abendrot" (a poetical way of saying At Sunset).

Here, with the RSNO is Norwegian soprano Marita Solberg, and her beautifully rounded and mellow tones fit magnificently with the mood of the songs. Lyrical, refelctive, sensual, melodic, peaceful, and full of love, these songs require a sympathetic and yet not too-sentimental a treatment. Solberg had the balance perfectly.