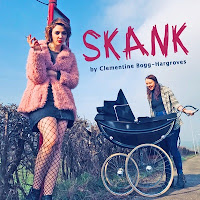 This evening I tootled off to Salford's King's Arms pub theatre; a venue new to me, but quite easy to find and reach since it is only a 2 minute walk away from Salford Central railway station. The pub itself is friendly and homely, whilst their theatre (upstairs) was surprisingly well-appointed, and seated about 80 audience - and this evening it was a full house.

I was born and brought up in Canada, and lived my adult married life in the South West corner of England only moving to Manchester 12 months' ago, and so was totally unfamiliar with the word of the title. According to the Urban dictionary which I referenced to understand the word, it means a lower-class trashy female (usually young) who acts slutty, is cheap and nasty, etc... and in order to get a flavour of the ensuing one hour in the company of Skank, I might best describe it as a compromise between Shirley Valentine and Fleabag! [although I admit also to never having seen the latter!]

Written by and starring Clementine Bogg-Horgroves [ably directed by Zoey Barnes] the one hour play is a little like a performance monologue, as we are thrown straight in at the deep end encoutering both the mundaneness and the "chav"-ness of her as she enters with her baked bean tin.

Bogg-Horgroves delivers a tour-de-force performance, and her character of Kate is excellently crafted. I haven't met people like that myself too often thankfully, but there is no doubt that they do exist. However, despite the title, and despite the omnipresent full-thottle in-your-face-ness of the production, there is also something suprisingly human and fragile about her and her condition, which makes the character both fully-rounded and believable.

The comedy and the jokes come thick and fast - in much the same way as most of us revert to comedy, usually sarcasm, in times of stress or difficulty. And it is in the second half of this play that those stresses and difficulties come to bear. The first half is just warming the audience up and making our understanding of Kate complete (even her desires about Sexy Gary and her jibes about her office colleagues don't seem real, but manifestations of her comedy exterior in order to hide something more disturbing underneath). A swift and easy Fringe Theatre-style set change takes us to a hospital and despite the humour not letting up, the tone has changed, and she has changed. I found this section to be deeply moving and real at times.

Bogg-Horgroves has proven to be both a talented and sympathetic writer who understands Kate and people like her - perhaps, without the nomeclature of 'skank' much of what she portrayed was autobiographical in some way - but she is also a sensitive actress who took us all on a journey through no-punches-pulled comedy and pathos.