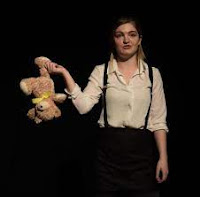 It has oft been cited that the best writing comes from personal experience, and in the case of  'Proper Adult', playing two evenings at the studio theatre of Altrincham's Garrick Playhouse as part of this year's Greater Manchester Fringe Festival, I can only assume this to be true. I don't know, but it did feel like the writing came from a real place, which was only ameliorated by the fact that the writer and only performer in this 45-minute long monologue was the same person; Megan Relph.
"What is it about being an adult that means your soul has to basically die?" asks Rachael, our 18-year-old, working class protagonist, who has recently found her first job as a waitress on minimum wage (played superbly by Relph). There seems to be an imaginary but all too real a "fence" that one has to climb over the moment you reach 18 and become a 'proper adult'. No more fun, no more imagination, no more play, lest people think you are weird!

Relph takes us through Rachael's childhood and her relationship with her younger brother; and the people she comes into contact with - each one being clearly defined and recognisable. But she's now 18, has to start earning and taking care of herself; and yet she doesn't want to grow up... at least, not yet.

In this humourful 45 minutes (full of some very subtle directorial and physical nuances - aided in this respect by co-director Parissa Zamanpour) Relph speaks directly to us, the audience. It's a little unnerving at first, especially when, upon entering we encounter her seated at a table in her own world observing the 'fourth wall', but we soon get used to this.

From a personal perspective I found the ending too much of a leap of narrative and emotion for such a monologue, and somehow jarred with the rest of the piece, and would have kept that part of Rachael's story for a longer, more in-depth exposé should Relph chose to write one in the future.

A very enjoyable, wry, perhaps even cynical, look at a teenager facing the realities of adulthood.
Reviewer - Matthew Dougall
on - 3.9.21
at September 04, 2021
Share