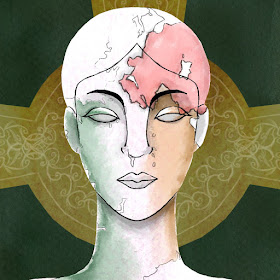 Going off the title alone, which translated is 'The Irish Antigone' or 'The Antigone Of Ireland', then I truly expected this production to be in Gaelic. My mother's first language is Scottish Gaelic as I grew up in the small coastal resort town of Oban, and was fascinated to see just exactly how much of the play I would understand, never mind the fact that I haven't heard or spoken Gaelic in over 30 years and that Irish Gaelic is considered the purer and older form of Erse and is quite different from mother's Scottish Gaelic. However, I was quite disappointed to find them all speaking English (albeit with a firm Northern Irish twang!)

On the other hand, I think it was a huge relief to other audience members to find them speaking a language that they could understand!

James Beagon has crafted a superb version of Antigone. It is clever, immediate and relevant. The main plot events of the original have been kept, but superbly transported to a near future in Northern Ireland where Brexit has imposed a hard border between the two Irelands and the sectarian troubles have started to flare once again. Annie (not Antigone) is now the central character who desires to bring back the honour of her father's name and thus has started an underground new IRA. (very ill-equipped and very impromptu - but they are important beginnings) However, squabbling over what they are to call this group [Sleachta Na h'Eireann] takes up more energy than fighting for the cause. That is, until the arrival of an outsider, a (London)Derry girl who ingratiates herself into the group as Annie's sisters's lesbian lover...

The play is fast-paced, minimalist, and easy to follow. I enjoyed the use of masks (due deference to the Greek tragedy), and the commitment and energy palpable. It was a very raw production, rough around the edges with no frills; but somehow that didn't matter, it kind of suited the mood and setting.

What did bother me though were the costumes. T-shirts advertising Nintendo and other such large emblazoned motifs did jar. I much preferred the sensible plain blacks of Anna, this worked much better.