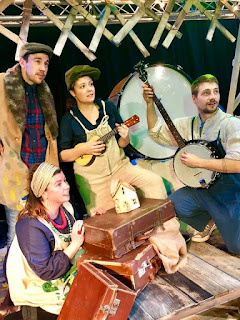 For an alternative to pantomime, and for something a little more low-key and intimate, then Oldham Theatre Workshop's production of the well-known tale of Hansel And Gretel is most definitely worth a look.

Using the small and limited theatre space to its absolute max, a cast of 8 take you through their version of this classic tale with accomplished skill. Their innovative and clever use and re-use of props and space to define areas and locations was excellently thought-through, especially when the stage's playing area had been reduced further by utilising live music throughout. It was this live music though which made this show more special. Written by accomplished duo Sarah Nelson (book) and James Atherton (music) with Atherton playing the piano through the show, the music was always appropriate and up-beat. It sounded lovely with some really catchy melodies which I could see the young children in the audience latching on to. Even I was tapping my feet on various occasions. Augmenting this sound from time to time were cymbal, beat-box and guitar, and when this fuller sound appeared one really could imagine what these tunes would sound like fully orchestrated.

The story, which was told clearly, precisely but at no point condescendingly, was very much the original German fairy story. Except here the moon talked, and three small nocturnal forest animals tried to help, but in the end could only offer friendship.

The play was only 70 minutes long, and so could quite easily have been played through without interval. This would have been preferable for me, but maybe the company thought that since the show is aimed at infant school children, a break would be better.

Hansel (Sam Winterbottom) and Gretel (Natasha Davidson) worked very well together and convincingly played younger. There was a nice difference in character between the two but at the same time, keeping that brotherly / sisterly love for each other, making their well-measured portrayals very real and sympathetic. Daniel Hartshead played a down-trodden and hen-pecked husband with an easy sigh of resignation. He didn't really seem to be too upset at losing his children in the woods, and didn't take much persuading from his evil wife either. A very easy to watch actor though, and by and large I enjoyed his interpretation. Sophie Ellicott had the hardest job of all since she not only played two characters but both were evil, and so trying to find two differing evil caricatures within the same play cannot have been an easy ask. Perhaps this is why I found her step mother rather too bland. I didn't believe her to be capable of plotting to and leaving her children in the woods, she was too 'meek'. However, once she became the old witch of the gingerbread cottage she was an absolute delight. Her switching from niceties to nastiness was straight out of the Witches' Handbook! This was a role in which she truly revelled and even the youngsters on the front row were frightened.

Madeleine Edmondson played a rather laconic and forgetful sleepy moon, an interesting characterisation but contrasted well with the worrisomeness and anxiousness of the rest of the cast. Whilst three young girls from the junior OTW group played a fox, a hedgehog and a mouse. (2 different casts on a rotation basis).

Using and challenging the theatre's lighting department to its full, this talented bunch brought this traditional German folk story to life in a very creative and surprising way. The young children - the chow's target audience - enjoyed themselves greatly, as attested by their smiling faces on exiting the theatre, and it was indeed a most pleasant way to spend an afternoon.

Story-telling theatre is an art, lying somewhere between Jackanory and pantomime. I think OTW have got the balance just right in this piece.