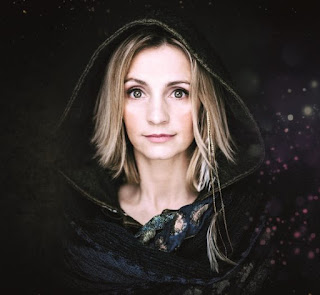 Elfin-like Irish folk singer, Cara Dillon, graced the Stoller Hall in Manchester this evening, as part of her current tour, Upon A Winter's Night. The title of her tour is also the title of one of the songs she sings in the concert, and, since it is December, the concert is very much given over to Christmas music and festive spirit.

The hall's stage this evening was very tastefully bedecked with fake Christmas trees (artfully lit), candles and fairy lights, and during the 2 hour concert we were treated to a variety of music, some composed by either herself or band member, Tom; some cover versions of either pop songs or Christmas favourites, and we even had a couple of purely orchestral tracks which saw Dillon either sit to the side or join in playing the Irish penny-whistle.

Dillon was accompanied by a four-piece Ceilidh band of fiddle (violin), Squeeze-box (concertina), guitars and piano. Their musicianship was lovely and this combination of instruments, with the addition of the Irish whistle, really brought out the authentic flavour of Irish music, especially when they played a couple of jaunty jigs and reels.

It was, however Cara Dillon herself that most of the audience had come along to watch and listen to.  To be honest I don't think I have ever been present at such a polite and well--mannered music gig in my life. The atmosphere was expectant but highly respectable, appreciative but not crude or loud. Dillon herself was very quietly spoken and as she briefly introduced each song, set the tone of the evening by being extremely polite and decorous herself.  We only let ourselves go at the very end when we simply couldn't stop standing and cheering, applauding loudly.

Dillon's voice is sometimes quite breathy, and sometimes sharp and clear depending on which style / song she has chosen. She has a very pleasant mellow tone, and one always had the feeling that there was a lot of power behind the voice which she chose not to use, allowing just a hint of what she was capable of to come through. This was most noticeable when she started the second half of the concert with an unaccompanied version of 'O Holy Night'.

Dillon sang versions of 'I Saw Three Ships', 'Silent Night', 'Rejoice Emmanuel', and 'The Holly And The Ivy', as well as her own compositions fitting for this festive season, including a brand new song she was trying out called 'Irish Christmas Blessing', and another song sung completely in Gaelic. Cover versions included '2000 Miles' and 'I Wish I Had A River'.

With such a pleasant atmosphere, beautiful lyric tones of Dillon, and the creative lighting of the LX department, this was a wonderfully sedate, but more than welcome addition to the plethora of Christmas entertainment available in the city from pantomime to Abba Tributes! Diminutive Irish folk songstress Cara Dillon brought a lovely and peaceful harmonic diversion to the mix this evening, and we all heartily appreciated this.