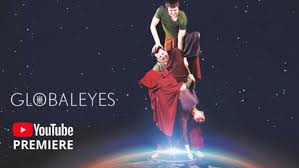 First performed at London's Chickenshed Theatre in 2002, and then reminagined and produced again in 2013, this last week saw the online premiere of the 2013 production uploaded onto Chickenshed's YouTube channel, so that those who saw it live can enjoy it again, and those who didn't have the chance to watch it whilst in London, now can watch it wherever they are in the world for a limited time.
Chickenshed Theatre Company are a group of well over 100 diverse young performers, mostly youths, coming from all backgrounds, social standings, physical and mental abilities, race etc, where no-one is excluded. All perform on the stage and all work together creatively and co-operatively in an awe-inspiring and truly magical way. This is what Chiockenshed do, and it's what they do best.
This particular production, 'Globaleyes', is, as you might imagine, all about the current state of our world. More relevant now than it was in 2002, this piece aims to inform, educate, and offer hope and change in a world where mankind is strangling itself and everything aorund it, shortening the longevity of the planet and the quality of life for all who dwell thereon.
Subjects raised within the 2 hour show icluded slave labour, child labour, population growth, abuse, human rights, ecological and environmental issues, and much more. It was a hugely ambitious project, and although there was much to say and many heavy and contentious subjects covered, it never felt rushed or overloaded.
The show had no dialogue as such, the cast worked silently with voice-overs of contemporaneous news bulletins, slogans, political speeches etc, with images to exemplify and ameliorate shown on screens above the performance area.
The cast of hundreds instead gave a very physical and contemporary performance, using dance, song, movement, and physical theatre techniques to push and progress the ideas. As interesting as this was, and indeed, as excellently crafted as it was, I did feel though that much of what was happening on stage did not directly, or even in some cases indirectly, ally with the voices and images. It became difficult to see the two as connected sadly. Moreover, much of the performance was given a blue or dark blue hue with the lights and haze was used too at times. On the computer screen this made it extremely dark and difficult to see.. definition and faces were sadly blurred or fuzzy. This was never the case when standard straw or steel lights were used.
Directed by Christine Niering, Jonathan Mortan, and Louise Perry, with origianl music under the direction of Dave Carrey, this strong and powerful show was a hugely ambitious project which I feel sure would have been exhilerating and worthwhile for the studemts and young people collaborating and performing in it, and even as a live show, it might have had more punch; but sadly, on the flat screen without 'atmosphere' it did feel a little overlong and somehow flat.
Reviewer - Matthew Dougall
on - 27/9/20
at September 29, 2020 No comments: