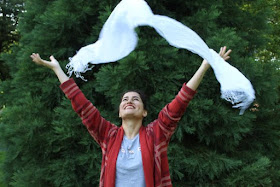 The Women Of Freedom Square is a devised work-in-progress piece of community theatre, led by the Manchester-based Sheba Arts, an organisation which aims to give marginalised, migrant and refugee communities a voice through art.  It's an awareness-raising exercise, but the world of The Arts, especially theatre, can be a very powerful and political tool if used correctly.

Since it was the first time that any of the cast had ever set foot on a stage before, and the stories they told were deeply personal and emotive, it would be very unfair of me to critique anything at all about the artistic elements of the 50 minute production. Instead allow me to give you a little background to the piece and how it evolved.

Taking inspiration from the so-called 'Blue Girl': a young lady who, after being arrested and imprisoned for trying to enter a football stadium dressed as a man in Tehran, set herself on fire when she came away from her trial.  And so this evening's play was set in that city, Tehran, the capital of Iran, a country in both political and religious turmoil. The play focused on 5 seperate stories, instances where women have tried to break away from the uber-rigid controls set on women in Iranian society. In fact one could almost say that the play as it stands at the moment is more a statement about male patriarchy than about the subjegation of women. I said I would not speak of artistic merit here, however, the decision to use just one male performer and yet have him half-concealed with his back to the audience as he spoke, was a hugely symbolistic and imageful idea.

The performance was delivered in two languages, sometimes in English, and as the play progressed, more and more in the language of Iran, Farsi - and the English translations were displayed on a screen above. Sadly the screen and the dialogue were often out of sync, but that is a minor issue. Whilst we learned much about life in Iran and how such things as not allowing women into football stadiums - something we in the UK take for granted and is indeed just a simple, basic human right for all - is forbidden there and the punishments are more than harsh, often ending tragically. The other storylines offered were a lady being imprisoned for organising a fashion show - for women only - where the models 'disgraced' their religion by wearing western clothes, dancing, and neglecting to wear the hijab. For flaunting 'sexual promiscuity' the punishment is execution. How a young Anglo-Iranian student over there visiting during the 2017 earthquake was imprisoned for helping a charity deliver aid directly to the needy. This, more than the other stories I think shocked me, since this seemed the most idiotic rule.. surely the country would be only too glad of outside help in such a time...?! Another woman for not wearing her hijab properly and another - a British reporter - for trying to interfere, speak with and report things which are 'forbidden'. Thus, without such plays as the one presented this evening, how is anyone ever going to know the truth and be able to do something about it.

I fear that Iran is not the only country to be repressing female expression, and whatever we think either of the religion or the politics of these countries, we must surely give every citizen the right to make their own minds up. Congratulations to Sheba Arts for your bravery at exposing such injustices and to the performers too for their perspicacity and determination to tell their stories. I often think that living in the UK is not easy; we are a deeply troubled, riotous, unsafe and state controlled society. It takes stories like these to shake me awake and realise just how lucky we are to be living here.