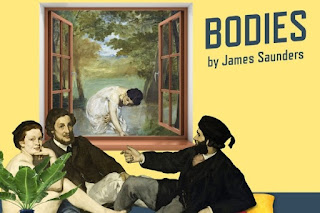 The year is 1978 and we are introduced to four characters, two couples - Helen and David, and Anne and Mervyn - in their respective suburban homes in Ealing and Esher. This is very much a play of two halves: the first being a series of direct addresses whereby other characters are occasionally brought into the intimate confessional ‘conversations’ that are being had with us; seamlessly cross-cutting between the present - this day in 1978 when the foursome are about to reconvene for a dinner party - and nine years previously.

We learned that Anne - outwardly composed and seemingly well put- together - quite unprepared and almost out of the blue (“it felt like time was running out...I was looking for a meaning”) had an affair nearly a decade before with David: the husband of her best friend, Helen. David - a “carelessly rising trendy executive” smugly confessed that he felt he had done nothing wrong. Mervyn, an ex-English teacher turned rather hopeless headmaster who had clearly had numerous affairs with other women, hit on Helen on a car journey home from a night out as a foursome, beginning the ‘other’ affair in the story. “I’d always assumed she was an attractive woman … most of them are!” he drools. And finally Helen - drawing us into her world of the disappointment of living with David and the brief thrill of her liaison with Mervyn, with a touching honesty. The tension built as a combination of retelling and re-enactment revealed the mutual discovery of their infidelities and the unpleasant fall-out that followed. It was a disastrous period that damaged them all, leading to David’s nervous breakdown, Helen and David’s swift exodus to America, and a very expensive enlisting into’ The Therapy’ programme: to reprogramme their minds, let go of the past and the feelings associated with it... and live more comfortably, albeit virtually ‘emotion-free’ in the present.

Back to 1978 and David and Helen were back in Esher after 9 years away and pretty much zero contact. Learning of this Mervyn, much to the horror of the other three, invited them over for a dinner party. Anne, who to some extent had moved on (although still angry with Mervyn at his “dishonest justifications”) was aghast at this arrangement. Helen feeling supremely awkward at the prospect of a reunion, again drew us in with a degree of vulnerability as the first half reached its thrilling climax: the jangle of the doorbell, the dimming of the lights ….well, we almost didn’t want the interval to happen!

As the effectively divided set of two homes became one, what started as a reasonably polite and convivial evening descended into complete carnage as the juxtaposition of the two couples became apparent. On the one hand the sober Helen and David, purified by their therapy experience who had - as Melvyn put it - “ stopped being busy, stopped drinking and stopped twitching.” Meanwhile Mervyn was knocking back his 4-quid-a-bottle scotch with gusto, joined in by the normally sensible Anne - deeply frustrated by her ex-lover’s self-satisfied claim that “happiness and indeed any emotional life is unnecessary” combined with her husband’s long, rambling, contentiously provocative speeches, passionately arguing the case for a Keates-ian approach to life whilst damming ALL psychology - “we neurotics wear coats of many colours - all you’ve got is the reality of yourselves - WHAT A YAWN!”

There was so much to commend in this brilliant production. From the flawlessly timed, precision direction of Tricia Thorn (the crescendo just before the interval was pitched perfectly) to the four superbly crafted and at times very funny performances: not least Tim Welton’s knock-out drunken vocal and bendy toy-like physical portrayal of Mervyn, that deserves huge recognition. James Saunder’s watertight script with its rich, thought-provoking and very original dialogue was a joy to behold. A gripping read in its own right I suspect, and I am baffled why it’s not performed more often.

Although set in the very different worlds of the 60s and 70s ‘Bodies’ has so much relevance to now. Our relationships, our infidelities, our ability to deal with our past mistakes and in Anne’s words “wasted time” - to confront our inner need to find at least some meaning to our lives. Plus - and very relevant to now - a timely comment on the Personal Development movement: its penchant for sucking people in, at a price, and the consequences of such immersing experiences... good or not so good (depending on your viewpoint). My companion described it as a “turbo-charged Abigail’s party” and indeed there are also fitting parallels with elements of Edward Albie’s two-couple carnage ‘Who’s Afraid of Virginia Woolf’ and even the popular 70’s tv series ‘The Good Life’ (Anne certainly reminded us of a slightly more risquee Margot Leadbetter!)

All in all ‘Bodies’ is a perfectly pitched, thought-provoking and a no less than compelling piece of theatre. Highly recommended!