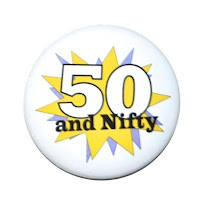 This evening, two plays were presented. However, rather than giving us a traditional second-play-follows-the-first as one would have expected, the two were 'serialised' a little like watching an episode of a soap opera on TV and we were shown three short episodes of one play with two short episodes of the other in between. It was a rather odd idea, but worked surprisingly well, finding just the right 'cliffhangers' on which to finish each section.

The first play was 'Fifty And Nifty' by Beverley Green. I remember watching the prototype to this as a very short almost sketch a couple of years ago at The King's Arms, and so was looking forward to seeing how Green had developed this original idea. The same premise had been kept.. that of a support group for those over 50, to keep active and healthy with regular weekly meetings.. the 'Fifty And Nifty' club; with the leader of the club being the absolute antithesis of what the club sets out to do, turning everyone who joins into dowdy, old-before-their-time unapproving prudes. Each week a guest is invited to lead a session, and each week that guest is told to sling their hook as the activity is absolutely not for her group despite her members wanting to give them a go and even enjoy them. There is comedy in this premise... "Button up your top button, no-one likes mutton" is her watchcry, and makes sure her members dress and act 'appropriately'. Sex, touching, movement and even enjoyment it seems are things for the under fifties only. There is much humour to be gained from such a premise, and one can almost imagine a Victoria Wood and Julie Walters routine. Sadly though, this evening, for whatever reason the laughs were very few and far between, and the whole was very lacklustre. The writing, most unfortunatley had not improved any from my first visit to this script and the jokes and set-ups were all too predictable. My favourite moment in the play was seeing an actor I know well, Andrew Marsden, playing a dancer and gyrating on stage. In reality he is the most unrhythmic person I know. This was hilarious. But only for people who knew him. For me, sadly, the most irritating thing with this play was the actress who played the lead role of Marjorie. Her characterisation was impeccable and her gait and mannerisms she had off to a tee. Vocally however, I was having great difficulty. Her every sentence trailed off half-way through to an inaudible murmur, and I did not understand 50% of what she said the whole time because of this. Most unfortunate. Perhaps also, by splitting the play the way they did, it lost some of the impetus and therefore the pace and the overall dynamics of the play and the characters were lost.

Played in two parts and sandwiched in between the above, was another play entirely. 'Remember Mavis Dixon'. Written by and starring Andrew Husband with co-star Andrew Marsden, this was a well-written and very real two-hander. Again, as with Fifty And Nifty, some of the storyline was very predictable, but here, this didn't seem to matter as much, as we were able to buy into the story completely, and by the end of the second episode I was left wanting more, and desperate to know how the meeting with Mavis went on, and did the son ever manage to get back together again with his betrothed....  We start with a grumpy, sarcastic and slightly embittered old man in a care home being visited by his son. In this bitter-sweet tragi-comedy, their relationship is a little turbulent and erratic, but the affection they have for each other is nevertheless obvious. Mardsen and Husband working superbly together and bringing about two extremely real and believable characters who had a good on-stage chemistry and were enagaging to watch. As the play prgresses we learn about Mavis, and we learn that the son has a boyfriend whom he intends to marry, but as the Fates take a turn for the worse, everything seems to go wrong. There is a sole-searching section, a moment of rawness, and a reconciliation.... but the whole still ends with a question mark, but a very positive question mark. I would love to see this play developed further into a one-act four-hander.