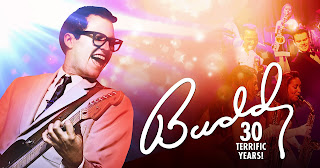 Buddy is a jukebox musical which pays tribute to the young superstar that was Buddy Holly. This evening at Salford's Lowry Theatre, this feel-good and toe-bopping show was celebrating its 30th birthday, and the programme lists with photos all the actors who have potrayed this iconic innovator, whose life - along with those of Ritchie Valens and The Big Bopper - was tragically cut short in a plane crash, over the 30-year history of this show.

Not just Holly, but this musical too was something of an innovator, being one of the first, if not the first, true jukebox musical to make it big on the West End and pave the way for countless others to follow suit over the decades, making 'jukebox musical' a new genre of theatre.

For those that know anything at all about the life of Buddy Holly then this musical will not reveal anything new or surprising, in fact the story only scratches the surface and is very quick to move on at quite a pace, placing far more emphasis on his music and the performing of it than telling his story. For those who have never heard of Buddy Holly - and I guess there must be some - then this musical will prove an excellent introduction to him, his music and his legacy.

The cast are all multi-talented actor / musicians and many of them multi-role. This is especially evident in the very Brechtian approach to the character of the narrator of the story, Harry Boyd, who we see first portraying High-Pockets Duncan, the DJ on the Texas radio station to first broadcast Holly and The Crickets' country music: yes, that's right, he started out as a country music group.  As Boyd changes his costume in front of us, and with minimal vocal or physical change, he then becomes other people influential in the rise of Holly. It's an odd idea, as he is the only character who uses this very Brechtian technique, and all other characters change costumes in the wings unseen, and enter as completely morphed characters. In this regard all the other characters, despite being to a greater or lesser extent caricatures, are still more rounded and believable than Boyd, who presents a monodimensional OTT caricature every time.

Buddy Holly this evening was played by AJ Jenks, and although he didn't perhaps capture the exact vocal timbres of Holly, he was hugely watchable and gave a high-spirited and creditable performance singing an array of Holly hits to the delight of the elderly boppers going down memory lane in the audience. Joshua Barton and Ben Pryor portrayed The Big Bopper and Ritchie Valens respectively; and both gave very authentic renditions of their alter egos' style and music.

Sadly the one thing that let the show down this evening was aspects technical. First, the set was, even by mid-scale touring show standards, minimalist and pretty rough around the edges. The blue and white patterened flats had definitely seen better days, and using the same desk for three different recording studios was stretching things a little. Unless of course the Brechtian idea was carried through into the set design too, but once we got to the Clearwater set of act 2, then Brecht had been forgotten. Second were the microphones. For some reason the mics were set at strange and different levels this evening, and we had feedback and crackle too at the start. The music was much too loud in comparison with the dialogue: this is a Musical, not a rock concert!; and I don't think Buddy Holly's head mic was even turned on at the beginning. Very messy.  Sadly, a few of the ligthing cues were also off this evening, and at least one spot was late.

Director Matt Salisbury had tried to inject some corny comedy in to the show, which wasn't met with anything other than apathy on the part of the audience this evening. I don't remember the comedy from the other times I have seen this show, and it didn't really seem to work in a biographic jukebox musical where we all know what happens is tragic not humorous. In act 1, Buddy's meteoric rise to fame is played in fast-forward (around 90 miles an hour!), and, turning the tables round completely,  the whole of the second act is devoted to his final concert in Clearwater, and we are the audience at that event. It doesn't feel like the same show, but rather two different productions joined by an interval.

A feel-good light-hearted look at an influential and immensely popular artist creating, not just a US-wide but worldwide interest in and love for a style of music that was to be known as 'Rock And Roll'. A small ensemble of multi-talented performers recreated the magic on stage, and you simply couldn't help getting swept up in the energy, enthusiasm and the catchy rhythms.