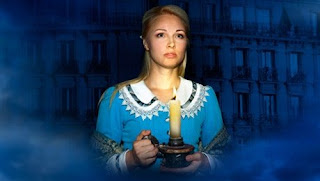 One of Puccini's most enduring scores, wraps its melodies and sumptuous deeply Romantic chord structures around a rather uninspiring and quite simple plot [libretto by Giuseppe Giacosa and Luigi Illica]. I know the storyline has been adapted and reworked on several occasions since the World Premiere of the opera in Turin in 1896, but the lack of depth to the plot and its simplicity is rather surprising considering the opera's popularity and longivety.

The setting is Paris and it is 1830 /40. We see a garret flat, it is Christmas Eve, and the four occupants of the flat have no money and no fuel. They are so-called 'bohemians' [hence the French title 'La Boheme'], and are living in the Latin Quarter. A painter, a poet, a philospoher and a composer, all trying to eke out an existence and keep the landlord off their backs. The main plot surrounds a doomed love-affair between the poet, Rodolfo (Vitalii Liskovetskyi) and a young girl from a neighbouring flat who embroiders flowers on clothes to make a living, Mimi (Alyona Kistenyova), whilst a more comedic sub-plot sees the painter Marcello (Iurie Gisca) flirt with a fun-loving debutante and some-time singer, Musetta (Maria Tonina). This is of course Grand Opera and as is the tradition, it all ends badly. In this case it is Mimi who, dying of tuberculosis, dies just moments before the final curtain of the opera.

Since seeing La Boheme for the first time in 2016, I have now seen three other productions of this opera (not including this evening). In 2016 it was Ellen Kent's company as indeed it was this evening, and so returning to this opera now, after having seen other versions, was indeed delightful and refreshing. Where Kent's productions score highly is in their lavishness [there is little or no skimping on design elements, and her operas also usually include at least one animal on stage: this evening it was a small (and extremely well behaved) dog which belonged to Musetta] and also in their traditionalism. The score is unaltered, the time and place are kept the same, and indeed, they are always productions which stick very closely to their composers' original intent. In this day and age where bastardisation and reworking is common-place and accepted, this is something which deserves huge credit, and traditionalists everywhere will appreciate.

Certain things I remember remarking on last time still apply sadly; such as the inauthenticity of children's balloons and black men's umbrellas being out of period, as well as the chorus movement and direction being rather staid and dare I use the word 'amateurish'. Happily however, the quality of the singing was excellent, and, as this is an opera which requires a deal of serious acting too in order for us to truly emote with the proceedings, then two performers this evening, particularly impressed me in this regard too. Not only did they have the most pleasing vocal tones (for my ear at least), but proved to be the most capable all-rounders too (again, in my opinion, obviously!). They were Iurie Gisca, reprising his role as Marcello, and a bass, new to me, playing the role of Colline, Vadim Chernhovskyi.

Ellen Kent continues to strengthen her links to the local communities utilising youngsters from local theatre schools in all of her productions. This evening it was the turn of some youngsters from Stagecoach Theatre Arts Schools in Salford and Didsbury. For Ellen Kent the operas are all about aesthetics and spectacle - which is evident throughout - as well as providing important cultural and artistic ties with every venue / city she visits.