NEWS: Sale Waterside's gallery is awash with plastic until the 20th February! 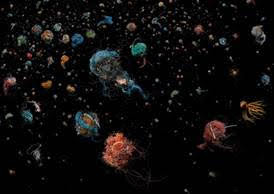 Barker collects debris from shorelines across the world and transforms them into powerful and captivating images.  At first glance, Barker’s images are reminiscent of sea creatures and corals suspended in a dark void beneath the sea, but closer inspection reveals a more disturbing reality. From footballs to fishing nets, cotton-buds to coffee-cup lids, Barker highlights the incongruous plastic items now ubiquitous in our seas. Currently, 8 million tonnes of plastic end up in the world’s oceans every year and if these trends continue, our oceans could contain more plastic than fish by 2050.

From accompanying scientists on an expedition from Hawaii to Japan, tracing the debris of the
2011 Tsunami, to a voyage on board Greenpeace’s Beluga II to the Inner Hebrides, Mandy Barker
has followed a trail of plastic pollution across the globe. The images resulting from these expeditions have become some of the most recognisable visual commentary on marine plastic
pollution.

Our Plastic Ocean spans a decade of Barker’s work including the series Soup, meticulously detailed composite images of discarded plastic objects; Albatross revealing 276 pieces of plastic found inside the stomach of a 90 day old albatross chick; and Beyond Drifting, which sees Barker trace the footsteps of nineteenth century botanist John Vaughan Thompson who collected plankton
specimens, the ocean’s most basic life-form. The exhibition documents Barker’s voyages and research; a case of sand permeated with microplastics recovered from a Hawaiian beach; and an installation of suspended footballs, crowdsourced from around the world for her 2014 World Cup project Penalty.

Barker says, “For the past decade, I have researched and documented the impact of oceanic waste, combining art and science to raise awareness. I hope to inspire positive action in tackling this increasing environmental challenge which is of global concern”.

Curator at Impressions Gallery, Bradford Angela Sheard says, “Barker’s images are both rich in detail and hard-hitting in subject. Impressions Gallery aims to help people understand the world through photography, and we’re delighted that this timely and compelling work is being shown at Waterside at the start of its national tour.”

Exhibiting alongside Mandy Barker’s exhibition is Bags for Life – an exhibition highlighting the impact of plastic waste on a local level. Manchester based photographer Luke Saxon has been documenting the proliferation of plastic closer to home in the canal ways of his native city. Rendered disquieting and beautiful in Saxon’s lens, the ever-present bags float ghost-like on the surface as enduring reminders of our impact on the environment.

Our Plastic Ocean
Friday 10 January – Saturday 07 March 2020 in the Lauriston Gallery
An Impressions Gallery touring exhibition.
Mandy Barker will be giving an Artist’s Talk on Thursday 20 February at 19:30.
watersidearts.org /ourplasticocean