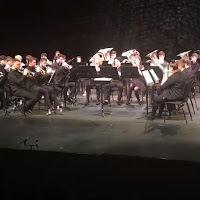 As part of a weekend-long festival of Brass Bands hosted by Manchester's Royal Northern College Of Music, the RNCM's own brass bands were also given the opportunity to perform; and this afternoon it was the turn of the Junior RNCM Brass Band to show us what they are made of! The Junior RNCM is a group of youths aged between 8 - 18 who have weekly professional tuiton with RNCM tutors to aid their development and hopefully give them a positive taster of what studying there full time would be like.

This 30-minute concert showcased four short pieces, ably demonstrating the band's versatility, repertoire, and indeed talent. Starting with James Curnow's 'Blenheim Flourishes', the band proved their ability and agility straight away. A fanfare of a piece, which is, by design, made to sound easy and simple, but behind are some rather technically difficult workings, and the band coped with ease. Under the direction of RNCM tutor and conductor Jon Malaxetxebarria, the sound they created was unified, balanced and perfectly pitched, sounding highly professional.

A curiosity piece followed this; Dan Price's 'Fantasy On London Nursery Rhymes', which took five famous nursery rhymes associated with London and connected them to five famous London landmarks and made a very playful piece, reminiscent of similar works such as Eric Fenby's delightful mickey-take of both Rossini and 'On Ilkey Moor Bah't 'At'.  My eyes were drawn during this piece to a young girl percussionist who coped adroitly dashing from xylophone to glockenspiel to bass drum and back again.

The third piece was a beautifully languid and melodic piece using lovely thick harmonies, sounding very much like a National song or hymn. This was 'A Time For Us' by Danish composer Jakob Vilhelm Larsen. The piece called for an octect of players performing separately from the main band, as they had solos and duets etc throughout the piece whilst the main body of the band provided the harmonic structure and added counter-melody. A hauntingly beautiful melody played with skill, passion and understanding.

The final piece was a showpiece and a complete change of pace and style. Matthew Hall's 'Nightingale Dances' is a short work which takes the song, 'A Nighingale Sang In Berkeley Square' and takes it on a musical journey from an envisaged 'Manhattan Transfer' interpretation, through a passo-doble, to a raucous, vivacious and flamboyant Hollywood Showdown! A superb way to finish their concert. Hugely enjoyable and played with precision and elan.