MUSIC REVIEW: The Halle Orchestra with members of the RNCM strings - RNCM, Manchester. 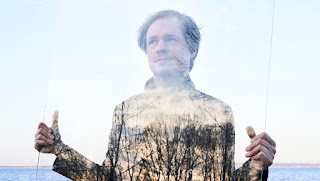 For this rather special concert, given as part of the RNCM's Strings Festival, the Halle Orchestra very kindly visited the RNCM to perform three substantial orchestral works. However, only half of the Halle orchestra's string section came, and in their place students of the RNCM were given the opportunity of playing these works alongside one of the most famous and best orchestras of the world.

The magic and beauty of this arrangement, apart from the obvious advantages afforded the lucky students, is that, from an audience perspective, if we hadn't have known this, then we would have been none the wiser from simply listening to the pieces. The RNCM students upped their game and responded to the challenge impeccably, and it was impossible to tell from listening alone, which were students and which regular Halle members.

The first piece of the concert was a full orchestral work by German, Richard Strauss. Perhaps Strauss these days is best known, at least outside the classical music circle, as being the composer of the theme tune to 2001, A Space Odyssey! [The opening bars of 'Also Sprach Zarathustra'] however, this evening it was one of his Tone Poems - a piece of orchestral music which follows a narrative - where there is a thematic journey of emotions, with a title that suggests the sequence of moods - in this case, the story of Don Juan. They became highly popular and standard compositional fayre in the Romantic period, but these days seem to have lost currency amongst contemporary composers. And since Richard Strauss was most definitely a Romantic at heart, often being described as the last true German Romantic composer, this stirring and evocative piece of music still manages to stir emotion and raise the spirits of audiences today; just as it did opening this concert this evening.

This piece, as indeed the whole concert, was conducted by Erik Nielsen, a conductor knew to me, but one I shall be looking out for in the future. He exuded both confidence and love throughout, and had a lovely firm control over the orchestra, acknowledging and bringing out where appropriate, but it was in the tidiness of the pauses where he scored maximum points. I adored his interpretations of both this and the Brahms Violin Concerto.

The second piece before a short interval was a piece of music I had no knowledge of, by a composer I had no absolute knowledge of, despite the name sounding familiar, I had not heard any of his music as far as I knew. The Russian 20th century composer in question was Alfred Schnittke, and his work, his Viola Concerto. Of German parentage, Schnittke spent most of his formative years in Vienna soaking up the music of both Beethoven and Schoenberg, and so it came as no surprise to me upon listening to this piece this evening that both those compostioanl styles and influences were very evident in the work. Indeed, the concerto flirted constantly with tonality, writing in my notes during the concert that the piece was a complete hotchpotch of styles and ideas all thrown together with no coherent flow. No one idea or theme stays for very long and the music shifts awkwardly from tonal to atonal and back again with alacrity, seemingly unable to decide which side of the compositional fence he wants to stay on. We heard a classical waltz combined with dissonance and assonance, a military march with wild discordant thrashing, stately dances combined with atonal chord structure, a classical call and response theme reminiscent of Mozart followed by a theme straight out of Berg's opera 'Wozzeck'. Although written in three movements they were played continuously and it was impossible to tell where one ended and another began. The piece was also rather strangely scored, as indeed the solo viola was the only viola, and there was only one section of violins (not 2 as is usual). Moreover, the piece was scored to incorporate grand piano, celeste and harpsichord. I don't think I've ever seen all three on a concert stage together before.

Playing the viola this evening was a very youthful looking Veit Hertenstein. One could certainly see the passion, gravitas and reverence that Hertenstein afforded the piece, and his playing was excellent. It was of course impossible to tell whether or not he played any of the right notes (or indeed in the right order for that matter) but one can only assume that he did. A talented and attentive player who was able to bring out the best in the instrument, even if he had to manipulate the viola in some rather strange ways and produce some rather strange sounds in order to do so.

The final piece of the concert brought me back onto terra firma and indeed to one of my favourite violin concertos from the Romantic period. Undeniably passionate and at times turbulent, but rigid and classical in form, this is a very difficult piece of music to interpret and extrapolate precisely the correct emotional response. Brahms' compositions are always lyrical, but there is always a much darker and more sinister side to them too. Finding the balance between the two and making the music 'sing' is the key to playing any Brahms composition. In three movements, with the second movement's theme being quite well known.. a theme that starts with the wind section playing alone for a while before the solo violin and orchestra take it up and extemporise.

Playing the solo violin this evening was Hungarian,  Kristof Barati. Again, an artiste I have not come across before, but certainly one I should like to see / hear more from. He is both a sensitive and passionate violinist, playing with love and dedication. He was 'pianissimo' when the score called for 'piano' and 'sforzando marcato' when the score stated 'forte'! I say this as praise not adverse criticism; I adored his interpretation of this piece. He technique was exemplary and the cleanliness of the sound he created, the layering and depth of his emotional imput, and the dexterity of his fingering seemingly knew no bounds. In the short solo violin encore he performed these things were shown more clearly than with the backing of a full orchestra, and Barati truly deserved the multiple curtain calls afforded him.

Listening to the wonderful Halle Orchestra with RNCM string students this evening was a privilege and a huge pleasure. An obvious highlight of the whole Strings Festival.