FILM REVIEW: Beautiful Than You - a short film by Shearman Bird on Youtube. 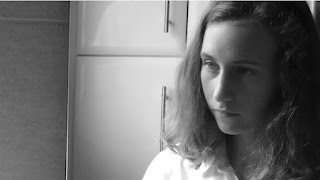 Shearman Bird Productions is a Liverpool-based company, and here, in the 6.5 minute short film, writer Steve Bird, aims to broaden awareness of a type of 'unseen' bullying which many youngsters are being subjected to, and might well go undetected and untreated.

The statistics for young people experiencing verbal and / or physical abuse is constantly on the rise and makes for a shocking figure, and all too often these issues are multi-faceted and so the victim feels trapped and has no way out. Therefore being able to spot the signs early on is vital.

This film aims to help in this regard. It is startling simplistic in its approach, and yet the film benefits from this. We see a teenage girl at home and at school, struggling to cope with the snide remarks, the laughter, the jeers and the basic cyber-attacking by her own peers and schoolfriends. Perhaps they are doing it innocently, not realising the harmful effects that their posting of photos / memes / comments about her are having on her; or maybe its malicious, we don't know, and it really doesn't matter. She is struggling, backed into a corner, and almost takes the 'easy' way out.

Rather than dialogue however, the girl - played by Grace Abela-Collins - is the only person in the film (save for three friends who we see fleetingly on the beach as the credits roll), and so her inner monologue is delivered as poetic voice-over. I'm not sure the poetry works, it sounds too formal, rehearsed and safe given the subject matter, but the voice-over idea does work well. Another nice touch was to use only one single piece of music throughout; Pachelbel's 'Canon in D Major' which is both a very familiar tune, but also has moments of darkness which nicely mirror the mood of the narrative.

Thoughtfully filmed, the film deliberately doesn't show you any of the bullying, but instead focuses on the victim's state of mind. The film has a positive and happy end (almost too happy and convenient), which again is obviously a deliberate ploy; but we need to be aware that many cases do not end happily but instead can and do lead to very tragic scenarios.

There is one moment in the film where the action is interrupted by a full-screen caption which states: "If the words you spoke appeared on your skin, would you still be beautiful?" Again this seems to jar somewhat with the rest of the cinematography, and doesn't really seem to be the main point the film is trying to make, and so I was a little unsure of what to make of this. However the message is clear... beauty is only skin deep, and bullying people for how they look or dress is still abuse and is both hurtful and damaging.

The film is on Youtube and can be watched for free by following this link:  https://youtu.be/eogtOu8o0Oo