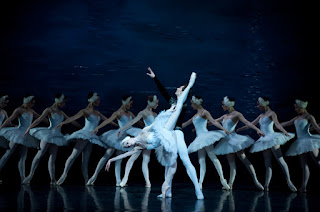 This evening I was at Manchester's beautiful Palace Theatre to see Moscow City Ballet - a permanent touring company of dancers coming mainly from Russia and former Soviet countries, and regular visitors to Manchester. It was my first experience of the company though this evening.

Swan Lake is one of the Top 5 most famous and performed ballets worldwide, and with good reason. There are plenty of solo dances and several diffeent characters, as well as a truly Romantic storyline blending fantasy with could-be reality, as well as it being a love story. Further, the music is written by the Romantic era's premier ballet composer, Pyotr Illych Tchaikovsky. There is everything in this ballet: drama, suspense, evil, love, romance.... it's Classical Ballet's equivalent of a pantomime in many ways. And the storyline is simple, but not facile.

With ballet, since there is no dialogue, it is imperative that the dancers are able to convey not just the story and their character, but also the emotions of their character as they go on their journey through the performance. Perhaps it is a fault of the artform in general, or perhaps more specifically with the articstic direction in this company (Lyudmila Nerubaschenko), but I was not being taken on their journey with them this evening and the standard of the acting (miming gestures) in general was awkward and wooden. Undoubtedly, the company boats some very talented dancers, but if one is unable to emote with them, and all you are doing is watching them dance without seemingly putting any feeling or passion behind the dance, the whole does tend to become a little bland. Lilya Orekhova performed Odette - the beautiful swan and daughter of the evil Von Rothbart who is transformed into a young lady - with poise and precision, and her balletic skills were undeniable. However in her pas-de-deuxs with Prince Siegfried (Mikhailo Tkachuk) it was almost painful to watch since there was absolutely no chemistry between these two, and yet they were supposed to be madly and deeply in love. Tkachuk's performance this evening was bland in the extreme sadly, looking quite distracted at times. Three dancers however did impress, and impress me greatly. Sanzar Omurbaev played the role of the Jester with comedic attention to detail, a wry grin on his face, and brought out unseen comedy in the role. Not only that his balletic skills were superb. Extremely engaging and hugely watchable. Prince Siegfried's best friend is the strangely named Benno, and in this production it was performed by a young Nureyev lookalike, Dzimitry Lazovik. His agility and precision in his act one solos were supebly executed and again was a highly engaging and passionate performer. I would have liked to have seen much more of him throughout the ballet. Siegrfried also has two girl friends who have a lot of dancing to do in the first act. These were Aisalkan Suiumbaeva and Kseniya Basnet. Both were very talented dancers, but for me Basnet had the edge. Again a dancer who was able to break down that invisible fourth wall and reach out to our emotions and sympathies.

The Corps were also extremely good, and with a very traditional style choreography, they made some superb pictures. We were also treated to the now iconic dance routine of four swans and their 'Dance Of The Little Swans'. which is always a favourite. One thing I did notice however was a little sloppiness in the corps's precision this evening. Legs and arms not always moving at the same time and not to the same level, which was a shame. Praise where praise is due though, and one thing I do applaud is that the Moscow City Ballet seems to allow their corps to feature dancers who have non-traditional / classical ballet dancers figures. I say this with all sincerity since we are now in 2020, and it should be an artform open to all. The choreography was all undeniably excellently comceived by the combined Russian talents of Lev Ivanov, Marius Petipa, Agrippina Vaganova, Yuri Grigorovitch and Natalia Ryzhenko - all of whom are very big names in the world of ballet choreography, and all deserve recognition here.

The company used back-cloths and little else to change each scene [the wing flats remained constant throughout]and the set was sufficient, obviously kept that way for ease of touring. Their lighting design was also minimal to say the least. There were a few instances where there was a sudden lighting change for seemingly no apparent reason, and a couple of instances where spots or areas should have been lit and the operators were late on cues. However all of the costumes were both traditional and sumptuously beautiful, with attention to detail.

In the pit this evening was the Moscow City Ballet Orchestra, a 40-piece ensemble that tours with the ballet. Under the direction of Igor Shavruk, there were some rather obvious bum notes sadly. These came primarily from the brass section, especially noticeable when the brass had either a solo moment or were given the melody. Most unfortunate. However, the biggest faux-pas musically for me was using a keyboard to electronically synthesise the harp. The harp plays a pivotal solo role in Tchaikovsky's score and to hear these notes being played by someone pressing down keys alters the sound and timbre, and also doesn't really fit with the rest of the orchestra who are playing their correct instruments. Again this was such a huge pity.

Verdict: A very mixed bag of a production. Some amazingly talented soloists with great stage presence with imaginative and traditional choreographies combined with much which was sadly not to the same standard at all.