INTERVIEW: With The Caravan Guys on their debut play, 'How To Beat Up Your Dad'. 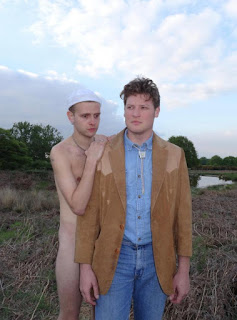 Number 9's reviewer Susanna talks to The Caravan Guys, Theo Mason Wood and Albert Haddenham, about their debut play How To Beat Up Your Dad.


Two musicians turned actors have produced a hilarious, yet frightening portrayal of manhood, abuse, violence and male competition. The original title for this show was How To Beat Up Your Dad (The Musical) Albert explained “This is not a musical, it was, but it’s not now, but it has music in it. I’m the musical director.” Theo helpfully added “ Aldous does drums. There will be synths.”

Hello! Who you are?
A: We’re Caravans Guys Theatre, we’re a small two man theatre company, based in London but we’re both from the North.
T: About a year ago, we were both been in bands. I didn’t know who Al was, and my friends kept saying “you need to meet Albert, he’s really funny!”
A: I’ve never heard anything about Theo.
T: Albert, then, had been hearing some of the stuff I’d been doing, and then he sent me loads of messages begging me to be his friend, and I thought he was this creepy dude, but actually really sincere.
A: That’s the number one thing about me.
T: I’d not been feeling satisfied with what I was doing and wanted to do something within acting, and comedy, and found myself looking at my new partner!
A: ME!
T: I had a story written, a small portion of this play.
A: There was one night we were watching videos and watching our favorite comedies and I just thought were we into the exact same stuff.
T: And when Al moved down to Brighton. I thought there was something here, so I sent him a message: do you want to make a play? Within the first rehearsal we had done pretty much the whole play. While getting really drunk. Slowly over months we drank less and less and now we can do the show completely sober.

“HOW TO BEAT UP YOUR DAD is the tale of one young man’s journey through manhood" - how does a man know they've reached manhood?

T: They don’t really.
A: We all know our gender through actions we’ve learned, and from the world around you.
T: Manhood can be many things: power, dominance, respect, aggression, violence - which is all quite depressing. Even soppy boys like us, you can see people fighting for dominance, be it about anything, not about physical strength, it could be about who knows the most about curry, or whose read the most books. We’re all crunching against each other to see who comes out on top. The character in this story starts as a young man, who is quite fragile, and throughout the play he learns to become respected, and ultimately win, he has to be violent and dominant and he can’t show his emotions.
A: It’s also about how trauma inflicts on those traits as well. It informs men's opinions of what is strong. That’s another key point: trauma.
T: You’ve recognised another man has made you feel bad or small, then you go into the next period e.g. not trying to feel bad or small, and then you push that onto other people and that’s how you inherit manhood and masculinity from each other and then pass it on.

Why did you want to make a show about manhood and violence?

T: Because we’re surrounded by it. All the time. Violence is like the end point of masculinity. Violence is the final option. How can you assert yourself over other people?
A: And the easiest one as well.
T: You’ve made me feel small and anxious and you’ve brought up things that make me question myself, but I can’t look at it, so I’m going to fight you.
A: Beat it out of me and you.
T: A guy I went to school with, his ex-girlfriend started going out with a new guy, and he saw them out in town, and he went up to them and said: “Look mate, I hope you understand this, but I’m going to have to fight you.” The other guy said: “Yeah alright.” And they shook hands, and my school friend got really badly beaten up. He came into school the next day and said “You know I had to do it” and that they had shook hands before, and shook hands after, and he got himself really badly beaten up. I just thought this is ridiculous that you solved the problem like this. You were feeling bad about yourself or sad.
A: It sounds like a medieval knight.
T: Haha! Exactly. And it’s not sorted. None of your feelings have been sorted there, you’ve broken up and now you’ve got a broken jaw. That situation is horrible and very confusing, but it is funny. The violence that comes from masculinity is so ridiculous. Look how stupid is this?! Men beating each other up because they’re feeling sad.

I imagine many men can resonate with the topic, what has the response been so far?

T: Good. People have got it. I was worried about how it was all going to go down. It’s quite full on.
A: I was worried as well.
T: ..about how horrifying the content is. And it’s all so true.
A: How men treat women, and how they treat each others is horrible.
T: And we say it, show it and act it to each other.
A It’s tiring rehearsing it.
T: Luckily people understand it’s funny, but we’re not poking fun at the subject. We’re not making fun of the victims in the story, or the men in it who are ridiculous. We’re showing how extreme masculinity is.
A: We’re looking forward to coming to Manchester to perform to an objective audience, because we've been doing it in our rooms.
T: There’s an electricity, a call and response, you’re bombarding people with these jokes and then hitting them with darkness.
A: You feel manipulative and in control. I’ve only ever performed with bands. The level of control in your hands is quite frightening and if you perform it badly then…
T: It feels like juggling, thoughts; feelings; jokes and it’s all hanging there and catching them all at the very end.
A: Why do you always use circus analogies? Everyone is supposed to relate to an analogy.
T: It’s like a diablo… !

Interview by Susanna Amato Read her review of this play here... https://number9reviews.blogspot.com/2019/10/theatre-review-how-to-beat-up-your-dad.html