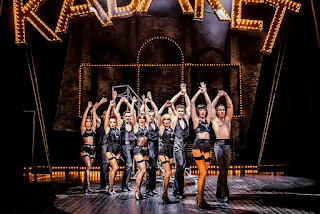 Kander and Ebb's evocative and emotionally-charged Musical of a between-wars Berlin, based on the writings of American, Christopher Isherwood, got a remarkably stark and brave re-working at Chester's Storyhouse Theatre this evening.

The story tells of Clifford Bradshaw, a young American would-be novelist touring Europe for inspiration for his next novel. At Berlin railway station he meets a friendly German, Ernst Ludwig, who, after hiding his smuggled goods behind Bradshaw's case, offers him Berlin's hosptiality as a 'thank you'. He stays in a rented room, owned by the elderly Fraulein Schneider, and is taken to the famous Kit Kat Club by Ludwig and introduced to the seedier, sexier, more lascivious side of the city by the dancers at the club, expecially a certain Sally Bowles, who ends up moving in with him and falling madly in love with him, as well as the club's enigmatic MC (Emcee), an androgynous character who acts as a kind of 'narrator' or 'plot developer' throughout the show: a manipulator, but never a master. The show starts on New Year's Eve 1930 and takes us through the first half of the decade, showing the rise of the Nazi party and how they started intimidating and persecuting Jewish people in Berlin long before the actual outbreak of the second world war.

In this, Rufus Norris' re-imagined libretto there is added shock value with homosexuality, bi-sexuality and full nudity. [and yes, I take it on board that this behaviour was quite the 'norm' in the dives of 'degenerate' society in Berlin at the time, but they are not present in the original libretto / score] There seems to be a zeitgeist within theatrical productions of late to modernise, update and bastardise works for sensationalist propoganda or to try and illustrate some modern issue (usually socio-political), rather than finding new writing to do this and allow the writings of past masters to speak for themselves without feeling the need to contemporise or transfigure. Norris' brave ideas have gravitas; and whilst some work well, others seem to have been inserted quite jarringly and take away from rather than add to the show as a whole.

John Partridge played the pivotal role of Emcee with sass and enjoyment. He certainly made this character his own, and proved to be a huge crowd-pleaser. His rendition of 'If You Could See Her' along with imaginative, sensitive and hugely praiseworthy direction was the most emotional and pognant moment in the whole show for me. Kara Lily Hayworth (looking quite remarkably like a young Liza Minelli!) created a Sally Bowles who was both sympathetic and frightened, with a lovely singing voice and great 'presence'. Anita Harris was a very personable and real Fraulein Schneider, ('What Would You Do?' was outstanding) and worked eminently with James Paterson's ever-optimistic Herr Schultz. Their lovely duet in Act 2, 'Married' was excellently measured. Paterson giving a very human and believable portrayal of the elderly Jew. With a sterling supporting cast and ensemble, with some very energetic and libidinous choreography, (Javier De Frutos), the cast worked their way through this wonderful score and heart-wrenching story. It was such a shame that the German accents were a little shaky at times and not consistent.

The set (Katrina Lindsay) was simple, but ideal for a touring production, capturing the era superbly with the positioning of the band, the WILLKOMMEN curtain, and the letters KABARET in lighting; whilst the lighting design itself (Tim Oliver) worked very well overall, however this evening there were a couple of instances where the moveable lights betrayed themselves casting odd shadows on the principals they were used to light. The stage fighting was superb and very realistic. The on-stage band, under the direction oif Phil Cornwell were in superb form, imitating the nuances and styles of the era immaculately and sounding wonderful.

Without spoiling the plot or the end for those who have yet to see this version, then it is not in any way conventional, and shows the stark reality and fate of many Germans during WW2. For me though, this image was too much, and felt completely wrong and out of place.The silence and gasps from the audience during this final montage was perhaps what director Rufus Norris wanted - but when a lady behind me sucked in through her teeth and the couple to my right gasped in horror, it had gone too far and was not in keeping with the Musical or the spirit of the show. Further, the Emcee is a survivor, not a victim, and I couldn't see him receiving this fate at all.

Verdict: For me, a rather Curate's Egg production but with more positives than otherwise, and certainly the production values and the intent of the show needs to be praised, An emotional evening's entertainment in the hands of a very talented and highly skilled team.