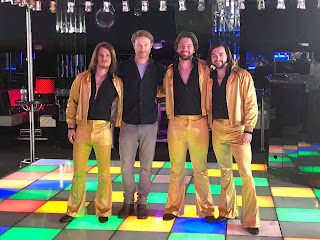 I was invited alongside other press agents and reviewers to meet and greet some cast members of Saturday Night Fever at Cruise Nightclub in Chester on the afternoon of the press performance and opening night of the musical. This was an ideal setting for the press launch as there was a disco dance floor in the building itself and disco crystal balls everywhere. The setting of Cruise transported us back to the disco era of the 1970s, Whilst we were waiting for the cast to arrive, some iconic Bee Gees songs were played in the background and the disco dance floor was lit up too.

I initially met Richard Winsor, who plays the principle lead of Tony Manero in Saturday Night Fever. He spoke about his excitement and enthusiasm for playing one of the lead roles and was looking forward to performing the role of Tony Manero in the show. Tony Manero is such an iconic role to play, he was hoping to put his own stamp on playing the character.

Having previously been the principle dancer with Matthew Bourne for 10 years, this has given him some great valuable experience and preparation for his role of Tony. Although, he has to act and perform the role, an incredible amount of dancing is required too. He mentioned he was looking forward to touring and bringing new audiences from other theatres up and down the country to see the show.

The guys, Jake Byrom, James Kenneth Haughan and Danny Knott respectively play the roles of Barry, Maurice and Robin Gibb in Saturday Night Fever. They were dressed in the iconic gold suits with flares as the band members. The outfits looked the part so much and added a nice touch to performing as the iconic band. They posed for a few pictures with some of the dance moves from the show. Additionally, they posed for pictures with Richard Winsor as well. (as above)

The guys all spoke about their shared joy and passion for playing the roles of the Bee Gees in the show. They mentioned that although they are replicating the songs of the iconic band, they were trying to put their own mark on some of the songs too. The also briefly spoke about their previious theatre roles, which has helped them prepare for performing the roles in the show. They actually sung a version of 'How Deep Is Your Love' acoustic (with no background music). Their vocals were incredibly good and was a pleasure and joy to listen to them performing this particular song.

Olivia Fines Wars unable to attend the press launch of Saturday Night Fever. Her apologies were passed on from the promoters at the event. It was mentioned that whilst the show Saturday Night Fever, paying homage to the classic movie, the stage version promised more drama, more music and hot new choreography in the show!!

All that was left for me to do now was to wait a few hours before this evening's press night performance of Saturday Night Fever at The Storyhouse in Chester.