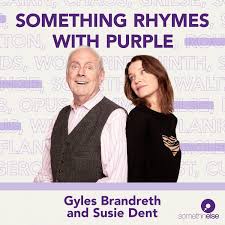 Gyles Brandreth and Susie Dent are at it again: giggling uncontrollably like naughty schoolchildren at the mention of a rude word!

I am a linguaphile, and avid listener to these two chatty and knowledgable individuals with their regular podcast 'Something Rhymes With Purple'. The format is very simple; a broad subject and area of linguistics is chosen, Brandreth pretends to be a lot dumber than he really is and asks all the questions, whilst lexicographer and etymologist Dent proffers the answers. It's very homely, low-key, down-to-earth, but also great fun and informative. There is a lovely banter between Dent and Brandreth which is quite engaging. And when the subject matter is even only slightly rude or offensive, it's a wonder they actually manage to impart all the information in between their fits of childish and gleeful laughter.

Today's podcast was titled Gyldenbollockes, and so we were treated to fits of giggles a-plenty. However, the nature of the podcast was to speak about surnames [literally 'additional names'] and how they came about, their origins and meanings. And whilst Susie Dent likened David Beckham's nickname of 'golden balls' to the medieval surname of the Gyldenbollockes of the title, we learnt that surnames first really took root in this country in the 12th century with the Anglo-Norman ruling classes.

Of course people's nicknames were a common source for surnames, but more common were where people lived and especially what job or occupation that person had. Later adding a 'son' to the end to indicate the younger generation.

We learnt of the top ten most common British surnames from Smith to Roberts. However, quite surprisingly perhaps, there was no mention of any foreign surnames on that list. No Patels or Muhammeds for example. I wonder if this is just of indigenous origin names, or if indeed those surnames are still not quite as numerous in this country.

There was much giggling to be had when mentioning some 12th and 13th century surnames which have now, thankfully disappeared from use, such as Windfuck. This, we find out is the original name for a kestrel. And the offending verb simply meant 'to beat' or 'to hit'. So someone who makes pats of butter would be a Butterfuck.

They spoke briefly of nominative determinism. This is where your name and your profession go hand in glove; an idea that your surname could perhaps predict your job. Some funny examples were given.

Susie Dent's three ununusal or lesser-known words today were interesting, however funnily enough, or surprisingly, I already knew all three. Not really sure what that says about me...! However the three words were 'darkling', 'fandangle' and 'estivate'.

And whilst you get out your dictionaries to look up the meanings of those words, the podcast finished with Gyles Brandreth leaving to polish his fandangles and make some square pats of butter!!

Always a joy to listen to these two sparring with each other, and since the podcasts are always less than 30 minutes' long, then there is always time in the day somewhere to sit with a brew and be educated and entertained. For lovers of words everywhere!