MUSIC REVIEW: The London Concertante: Music From The Movies - The Cathedral, Manchester. 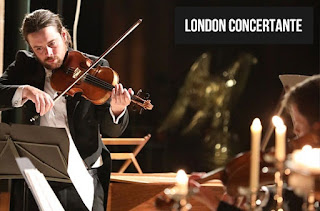 Regular visitors to Manchester's historic cathedral, the chamber ensemble that is The London Concertante, were with us again this evening to play a selection of their favourite music from the silver (and smaller more domestic version) screen.

The programme, despite being very informative about the history and rise to popularity of film music, as well as a little potted history of the London Concertante itself, offered very little in the way of programme information. The ensemble themselves are not mentioned, and so the 18 musicians on stage this evening were just that, nameless and unfamiliar, unless one of them was singled out as a soloist by the ensemble's first-cello-playing MC (who never introduced himself!). Further, and perhaps even more infuriating was the playlist. 12 pieces of music are listed, in no particular order, with the heading, "During this evening's performance, London Concertante may be performing some, all, or none of the following works". What use is that to anyone?! Thank goodness there was an MC who told us the titles and composers of the pieces they were playing. Actually the MC, did more than that, and his manner and self-deprecating humour was appeciated although, had the correct pieces in the correct order have been in the programme there would not have been the need for an MC at all, and the evening would perhaps have been a little smoother.

But let's talk about the actual music. The ensemble incorporated 6 violins, 2 violas, 2 cellos, 1 bass, 3 woodwind, 1 brass, a harpist, a percussionist and an accordionist. This selection seemed to work superbly for certain choices in their repertoire, but sadly, for others, they were unable to produce the fuller, more grandiose sound required to really pull the pieces off.  Such delightful melodies as the theme to Schindler's List, The Love Theme and Waltz from The Godfather, and the highly evocative theme from Out Of Africa were sublime, and the inclusion of accordion in such an ensemble was a genius masterstroke. However, their ambitions to perform music which really only truly works with the power and numbers of a symphony orchestra did fall somewhat flat. I am thinking especially of the Game Of Thrones theme, the James Bond medley, Jurassic Park, and their opening piece, Elmer Bernstein's Magnificent Seven.

The ensemble worked excellently together; seated where I was I could see the expressions on their faces and their obvious enjoyment at working together and playing this music. It's so important with such a small ensemble that there is a rapport and more importantly a trust in and with each other, especially when playing unconducted, as they were doing, and their togetherness and trust in each other was hugely evident this evening. The ensemble are all highly skilled, and this evening two of them especially were 'singled out' for solo spots. Ben Norris, the first violinist took two solos this evening, and proved to be a very personable, spirited and highly proficient fiddler, as he was 'let loose' with the gypsy melodies of The Edward Scissorhands theme, and showcased his talent superbly with the beautifully interpreted Meditiation from 'Thais' by Massenet (although I have no idea which film this appears in!). The other ensemble member to take centre-stage this evening was oboist Katie Bennett, who provided the beautifully haunting melody for the theme to The Mission. These pieces were all truly lovely, as well as my personal favourite from the evening, Shostakovich's Waltz No 2 which was used very effectively in Kubrick's film, Eyes Wide Shut.

The London Concertante though did seem generally far more at home with the classical works, and they were on stunning terra firma with their rendition of Mozart's overture to The Marriage Of Figaro  [used apparently in both Charlie And The Chocolate Factory and Toy Story!], and the emotive Intermezzo from Mascagni's Cavalleria Rusticana (again, I don't know where this appears cinematically).

One point I would like to make though comes from an aesthetics point of view. It would have been preferable for the string players to have been seated thus allowing more audience to see more of the ensemble. As it was the violinists and violaists (does such a word even exist??) were both standing obscuring the view of the wind players - also standing, and also obscuring the view of the percussionist who went completely unseen all evening!

This 18-piece chamber ensemble sparked off each other maginificently the whole evening, and let their hair down in a mad-cap encore which was a medley of almost everything else that they hadn't mentioned in the main body of the concert! Their talent and musicianship is undeniable and an absolute joy and pleasure to be in the audience for this concert. My only real negativity came from the choice of music; some of these pieces were simply not being given justice by scaling the orchestration down so much.. so much was lost. However, that's not the musicians' fault, and they played their notes with passion, love, and laughter.

The London Concertante will be back in Manchester next month to play Vivaldi's Four Seasons, and again in December for a Viennese Christmas By Candlelight. Looking forward to them both!