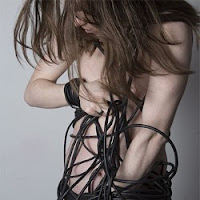 The Heresy Machine at Greenside on the Royal Terrace at 11.25am. I’d been invited to see it so obviously wasn’t going to refuse, particularly when I became aware that the show was about Alan Turing, the scientist who broke the Enigma code and went on to pioneer computer science. I’m pretty interested in the human story of this guy as he is only just being recognised as the national hero he is after the hideous treatment he received when he was alive. Unfortunately The Heresy Machine seemed to focus more on Turing’s relationship with a computer without any authentic attempts to investigate Turing or his story.

The writing by Seth Majnoon, is incredibly verbose which leads to a disconnect with the actors and audience in understanding what the piece is about. Use of phrases such as “promethean instincts” did not endear me, smacking of self indulgence and academic superiority. An artists' job is to convey meaning and in this they seemed satisfied in their own understanding of the piece but placed no importance on whether or not their audience could.

Looking at the Facebook page for the Section 175 Collective they define themselves as “a group of cyborgs working to create postgender posthuman futurity in our time.” Again, this makes no sense to this reviewer.

So accepting the fact that this is a lexically challenging production, I consider what can be taken from it in a visual sense. It incorporates physical theatre and even a little ballet set to a jarring electronic soundscape. There’s multimedia projections and it fulfils its description of being “transdisciplinary,” whatever that is meant to be defined as precisely, yet with no clear artistic storytelling aim. It’s a tragic shame that story-wise I didn’t get more out of this than and felt nothing to connect me to the piece. I don’t feel it’s all my fault by any means though.