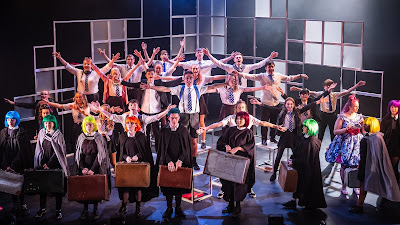 What is Prom! The Musical I hear you ask... it is the latest offering from the talented students and staff from Oldham Theatre Workshop. Performing this, their latest 'blockbuster' on the stage of Oldham Coliseum Theatre.

Oldham Theatre Workshop (or OTW for short) are no strangers to original plays and musicals, as the dedicated staff are more than happy to write original pieces especially for the young performers they have in their groups. I think they have surpassed themselves on this occasion though as this has 'West End' written all over it!

On the surface, this musical is little more than a copy-cat genre-stealing mish-mash of several other well-known shows, including, but buy no means exclusively, High School Musical, Harry Potter and Cinderella. However, on second consideration, there is much more to this show than just good old-fashioned Mickey taking; this is a powerful and emotive show in its own right and every single member of this 40-odd strong cast owned their place on stage this evening.

Set in two high schools - in parallel universes - the 'fairy godmothers' of one academy have been tasked in finding people worthy of and needy for a fairy godmother, otherwise the governess of the school will be forced to close down her School Of Magic. Two of the Fairy Godmothers are therefore transported into the alternative school to find such in need. This second school are in the midst of preparing for their 'Prom', hence the title. My only small gripe with this title is that for us 'oldies', the word prom is assosicated solely with America. We never had such things as proms when we were at school and so possibly gives the wrong impression. However, with great comedy characters - much funnier and more well defined than those in 'Matilda', and a modern fairy story which will not only hold the interest of the femmes but the blokes too, as one of the fairy godmothers is male (one of only two admitted to the school), this is a great story.

Musically, the show is full of lovely show tunes; all with a modern feel and there are certainly a couple of 'hat-nods' to other composers such as Lin Manuel Miranda and Stephen Schwartz in there, and the music suits the show and the characters perfectly. The chorus numbers and the harmonies were sung superbly, but my favourite song was Georgia Conlan's first solo moment as she sang so plaintively and emtionally bringing a tear to my eye as well as her own. Conlan played the pivotal 'Cinderella' character of Esther, and even before I knew she was a leading character I had already noticed her in the first choral numbers as a talent worth following. Both her acting and singing impressed me highly.

Her 'ugly sisters', Lisette (Millie Gibson) and Noushka (Ella Marshall) made the most of their comedy roles and Sophie Ellicott - one of several professional adults completing the cast - made for a very strong and hilarious mother / step-mother figure as one of the big-wigs at the school and determined to do whatever it takes to push her two 'beauties' foward and push Esther down  The two fairy godmothers had a lovely chemistry between each other, and their characters well defined. These were Effie (Sajata Dey) and Rayden (Billy Barlow), and the 'ah-factor' was certainly catered for as we were given a flash-back to see the Principal of the school as a young girl played with assured realism by Poppy O'Brien and her tiny fairy godmother, the very sweet Niamh Palmer.

Perhaps it is slightly unfair to single cast members out though as this was a show of hugely ensemble dedication and high energy talent.

There were a couple of minor issues with the show this evening though - hopefully no more than teething problems with it being first night. First, some of the lighting, excellent in most cases, did not offer sufficient cover of principals' faces and caused a few awkward shadows; and sadly the mics were not pitched all at the same levels, meaning that much of the dialogue was received at different volumes, some just too quiet. However these things are minor when compared with all the positives from this wonderful show. I am a huge fan of Musicals, and would love to see this taken up by a big producer - but let's use the same cast! 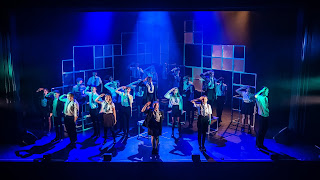