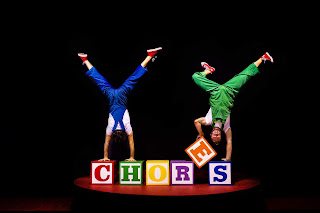 All the way from Ausralia, Chores is a physical theatre comedy for the young'uns. Julian Roberts and Derek Llewellin are clowns - not in your painted face circus clown idea, but use physical theatre and circus skills to comedic effect in order to bring smiles and laughter to their target audience.

The stage is set - a line of coloured boxes spelling out CHORES and a few teddy bears and clothes strewn on the floor. A voice-over admonishes her two children for leaving an untidy room, and they need to tidy it up before being allowed to play on their bicyicles.

In this 45-minute show [a good length for the 4 and 5 year olds] the pair get up to all sorts of mischief, such as jumping through hoops, acrobatics, and various balances, as well as juggling. The most fun parts though were certianly those which involved some kind of audience participation. These were water sprayers and large air-blowers with toilet paper attached making the toilet roll unravel and travel across the stage and the auditorium,

What let this production down however were two things. First, the build-up to each 'act' was too long, drawn out and not overly funny, thus losing the audience's attention and so they needed to work harder to bring us back each time. If they'd simply have concentrated on the comedy antics, keeping it fast and tight, it would have been much better received. The second thing was that involving the audience was absolutely the best way forward, but why only always concentrate just on the front row. The whole audience would have benefitted more from the two actors coming further in to the auditorium and 'playing' with more of us.

They did however, come front of house at the end of the show to chat with us and have photos taken if we wished, which was a lovely touch and obviously appreciated by the youngsters - even if at least a couple were somewhat surprised to hear them talking, sounding completely different from our local accents. [The play is without dialogue and is done all in mime].

The two performers finished their show with unicycle juggling, and their talents and personalities were undoubtable and enigmatic. I feel though that 'tightening' the show somewhat to make more comedy and fun routines and less of the inconsequential build-up to each would make for a more entertaining show holding the audience's attention throughout.

Where can I get one of those toilet roll guns from though...?!