NEWS: Do you know what happened after Peterloo? 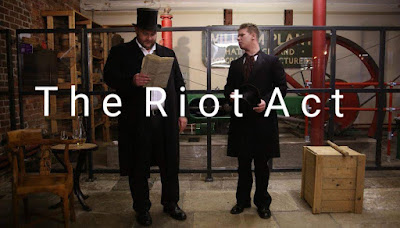 Do you know what happened after Peterloo?

It is the 200th anniversary of the Peterloo massacre in Manchester but do you know what happened next?

The Riot Act on Saturday 20 July, 1.30pm and 3pm at Manchester Central Library, looks at the Lune Street massacre in Preston on August 12th 1842... just 23 years after Peterloo.

Lancashire cotton-workers again marched in protest at appalling pay and conditions. Reaching Preston’s Lune Street the protesters were confronted by the authorities and read the Riot Act. By August 13th seven men had been shot and four were dead.

"I am a political writer anyway, all my work is political, so it's about the labour movement and socialism, and the development of all that in Britain."

Rob has been long-listed for The 2017 Royal Exchange Bruntwood Prize and won the award for Best Drama at Greater Manchester Fringe 2017 for Dark Satanic.