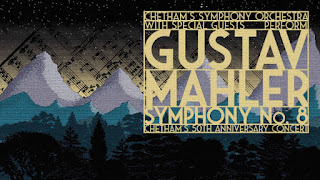 If I were asked to describe this evening's concert in only three words, they wold be wow, wow and wow!

Chetham's Symphony Orchestra each year has the privilege of performing their final concert on the stage of one of Europe's leading concert houses and home of the famous Halle Orchestra; The Bridgewater Hall. However, this year was not just any final concert, but it also marks the 50th anniversary of Chetham's Music School, the largest and one of the most prestigious dedicated music training establishments for the 10 - 18 age group, and it also marked the last time we will have had the opportunity of watching Stephen Threlfall conduct in his role as Director Of Music at the school.

Something a little bit special therefore needed to be found to musically mirror this occasion. Knowing Threfall's love of Mahler, the idea of conducting a rarely performed work of such size and majesty must have been something of a dream come true. Mahler's 8th symphony isn't just epic but has even been knicknamed 'The Symphony of a Thousand'. Alongside other contenders to the 'epic' title such as Berlioz's Requiem or Schoenberg's Gurre-Liede, Mahler's 8th requires the combined forces of an augmented symphony orchestra, mixed adult and children's choirs, and soloists. and this evening Stephen Threlfall found himself in charge of getting on for 500 performers, including organ, off-stage brass ensemble and off-stage soprano!

Mahler's 8th Symphony was written in the very early part of the 20th century at his composing hut in the woods near Wörthersee in Austria, and was premiered in 1910 by the Munich Philharmonic under Mahler's own baton. It was the last of his works he would hear performed in his lifetime. The symphony is in two movements, connected only by their fascination with death and the afterlife. The first movement takes the text from the Latin Mass, 'Veni Creator Spiritus' whilst the longer and more complex second movement uses Goethe's text from Act 5, scene 7 of 'Faust: Part 2'. The first movement being sung in Latin and the second in German.

The obvious problem inherent is not how much noise can such a mass of musicians make, but the quality of the noise they make. To put you all out of your misery then I can state with alacrity the noise was unbelievably loud as their voices and orchestral sounds filled this acoustically superb concert hall, but the sweetness and quality of sound was something else altogether. A lush, warm, and engulfing sound which never, not even for one second, felt harsh or jarring. The choirs and orchestra were also just as beautifully mellow when required to be quiet and soft too; since the hall's acoustics worked with them again here and even the quiestest single sound was precise.

This evening The Chetham's Symphony Orchestra (which was possibly the largest orchestra that Chetham's have amassed) included 3 mandolin players, 4 harpists, 2 sets of timpani, a pianist, a celestist, harmonium player and organist, sounded absolutely incredible. For both myself and my companion this evening we simply could not believe that we were listening to musicians who were at the most 18 years old, and some considerably younger. The quality of the sound created and the technical musicianship displayed was utterly mindblowing.

Add to that a sextet of 'offstage' brass players who were positioned on the public gallery above the stage, gave the orchestra, when playing together, an almost polyphonic sound.

The work also calls for mixed choirs, and this evening we welcomed onto the choir seats, and many other seats nearby and above too, The Leeds Festival Chorus, The St.George's Singers, Chetham's Chorus, Chetham's Children's Choir, The Manchester Cathedral Choristers, and The Hereford Cathedral Choristers. Once again, truly exquisite sounds came from these sections. Considering the choirs were placed on three different levels in the hall and some were so far away from others that there was no way of being able to follow, and had to sing purely on trust and keeping a keen eye on the conductor; also considering that a large percentage of these singers were again young children, one can only praise them even higher. I am a fluent German speaker and there were a few problems with diction and comprehension, but as for the quality of the sound and the beauty of the harmonies, they were indisputably wondrous.

Over and above this were 8 solousts. 7 of these were on stage in front of the orchestra, whilst the 8th came on only for the briefest of sections towards the end of the second movement, standing "off stage" in a similar place to the brass sextet. All 8 were without any doubt superb. Far be it for me to even try to criticise such prowess. However, the two most pleasing voices for me came from the off-stage soprano whose clarity of diction and purety of sound surpassed any of the on-stage singers. Whether this was due to her proximity in the hall or not though I couldn't tell. I believe this was soprano, Caroline Taylor. Of the 7 on stage, then it was baritone Gareth Brymnor John, whom I could easily have listened to for much longer, having such a mellow warmth to his voice which just pulled my emotional cords more than the others. However, full credit must be given to all for such a magnificent rendition of this behemoth of a work. To sopranos Gweneth Ann Rand, and Ailish Tynan, mezzo-sopranos Kitty Whately, and Margaret McDonald, tenor Mark Le Brocq and bass Paul Carey Jones.

As a prelude the massed instruments and voices treated us to a spine-tingling rendition of Benjamin Britten's arrangement of our National Anthem, 'God Save The Queen'. Starting pianissimo and building to a huge orchestral and vocal fortissimo climax in just 3 minutes and two verses was an exceedingly powerful and emotive start to the concert. And with the Mahler the emotion just increased with every bar, right up until the highly charged fff finish with organ, brass sextet, choirs and orchestra providing a truly late-Romantic extended finale (even though the work falls into 20th century music) to this incredibly complex and heart-felt music.

Bravi bravi bravissimi tutti! What a most excellent way to finish the school year, the school's 50th anniversary and the 'moving on' of the very enigmatic and passionate Stephen Threlfall. All I can say is 'wow. wow, wow!'