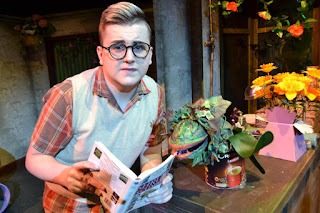 The latest offering from Oldham-based Brit Theatre, an amateur company open to all offering professional standard production values, was the evergreen (is that a pun?) Musical, Little Shop Of Horrors.

For those of you who don't know the show (where have you been hiding all this time?), it is a spoof on the 1950's B-movie Horror genre, which sees down-trodden and insignificant Seymour, a 'no-goodnik' florist assistant feed an alien venus flytrap blood, (and more!), in order for the plant to give him fame and fortune. The plant also has an evil agenda of world domination too. Yeah, I told you, classic B-Movie horror plot-line! There's love in there too, provided for by co-worker and somewhat ditsy blonde, Audrey, and warped comedy in the form of schadenfreude as we laugh at the downfall of Audrey's dentist boyfriend, Orin. Three girls - a three part harmony singing group in the style of The Shirelles or The Ronettes - act like a Greek Chorus throughout, and of course, the plant itself (named Audrey 2) needs both a voice (provided by an off-stage actor - in this case very ably by Dale Martin), whilst a member of the stage management team needs to actualy 'be' the plant in order to maniuplate and move it.... yes it grows so big!

Brit Theatre are renowned for their West End worthy sets, and of course this evening didn't disappoint. Mushnik's flower shop took centre stage and cleverly opened out when necessary revealing a very realistic and well-designed space. The one thing which did spoil the 'illusion' for me somewhat though was the final version of the plant. This was gven pride of place centre stage, as indeed, Audrey 2 is the focus of and reason for the whole show. However, no attempt had been made to conceal the workings of the plant. The handler could be clearly made out underneath the large 'mouth', and the base of the plant had not been covered or made to look like part of the plant. It was obviously a wooden box on wheels. If they had only just had it painted green and covered it with leaves or, as most productions do, long roots, it would have worked so much better.

For the run of this production there were two alternate principal characters for the roles of Seymour and Audrey. This evening it was the turn of Ethan Seal (pictured above) and Eve Tremoyne-Ryan. Both of these young actors had a very good understanding of their characters and I enjoyed watching their chemistry on stage together. Seal especially had a very pleasing and sonorous voice. Their 'Suddenly Seymour' duet was sung superbly. Steve Norman played the florist shop owner, Mr. Mushnik. I enjoyed his characterisstaion, however, his accent was a little insecure and sounded very German. He is Jewish, and most probably of Russian or Polish decent. The sadistic Orin, a dentist with a talent for causing things pain, was given a rather suave make-over this evening by Stephen Costello.

The 'Ronettes', Chiffon, Roxanne and Crystal worked excellently together and sang, danced and commented their way through the show was polished ease. Sadly this evening some of the notes were a little flat or the harmonies not completely fixed, but that could easily have been due to a lack of energy and a familiarity with the show, since I came on the penultimate evening. I enjoyed their sassiness, and the way that director Dave Benson had utilised them throughout.

In fact Benson's directing was secure. tight and imaginative. I liked the way the show started and finished. As many times as I have seen this Musical - and I have seen it many, many times - I have never seen it end like that before. (no spoilers, but kudos to the young girl!) Act one finale was excellent, and in general the production was tight and secure. I think though that sometimes just a little more comedy could have been found in places.

Live music was provided for throughout with a small band under the leadership of Matthew Corrigan and some lovely choreography came from the ideas of Helena Ferreira.

All in all, a highly praiseworthy production with high production values, and a company (Brit Theatre) that one really needs to keep an eye on... they're going places.