REVIEW: Is There Anybody There? - The New Adelphi Theatre, Salford 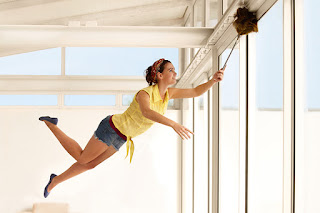 'Is There Anybody There?' is the title of the latest play from local award-winning playwright Jim Cartwright, ['The Rise And Fall Of Little Voice' and 'Two'], and this evening the University of Salford opened its theatre to a special script-in-hand presentation of his latest draft. It has to be stressed that this, despite it being open to the public, was not the finished article, but very much a 'work-in-progress' piece which was for the first 2/3rds of the play partially enacted and 'blocked', [the cast moved about the stage following stage directions both from the script and from the director], whilst the final 1/3rd was a traditional rehearsed reading scenario, with the actors seated and stage directions read aloud.

Local well-known actors were asked to perform the five protagonists - four cleaning ladies of a large multi-floored business office block, and a Glaswegian docker ghost, masquerading as an Red Indian Chief! [it makes sense in context, honestly!] Whilst the various much smaller male characters were actually played by Jim Cartwright himself.  And for all the times I have ever met with him, I had never seen him on stage acting before, that was a very pleasant surprise, as he clearly had a talent for it!

This script-in-hand performance had had one week of rehearsal and was directed by Anthony Banks. The story follows mostly Joy (one of the four cleaners) who, after allowing her friend and co-worker to put a false profile of her on social media as a psychic, finds herself with a rather unwanted and dis-spirited Spirit Guide and a whole host of comedic premises abound from this. The script 'as is' took a very long time to warm up; the exposition being too protracted and static. However, once it did get going then it felt far more cinematic than theatrical, and indeed I feel that Cartwright might well have instead of having written his latest stage play have written his first screenplay!

As you might expect from a Cartwright script there is plenty of humour and plenty of northern soul. Although some of the humour did seem a little forced this evening with some blatant puns, which out of context I would have howled at, in context seemed to fall flat. The tone does a dramatic U-turn in the second act too as it becomes more of a mystery thriller, and the comedy somehow disappears almost entirely for a long while.

The set design and the lighting were both credit to students at Salford University and it was easy to tell that these students have great potential, as both worked well, but the play relies very heavily on magic and SFX, as well as perhaps CGI and cinematic style screen projections to do full justice to the denouement (hence my thinking about film). However it was lovely to see Wendi Peters - who I last saw hamming it up for all its worth in the musical Salad Days - showing us what a true trouper and superb actress she really is.

Nice use of song throughout, and an interesting if not entirely original premise, make this play entertaining. Yes, I was entertained by it, and certainly feel that - as we say in the biz - it has legs; but it does need further development; and if no-one has yet asked for the cinema rights, then may I be the first!