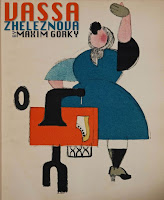 Maxim Gorky’s play Vassa Zheleznova, written in 1910 and then revised by the author in 1935, tells the story of its title character, a mother and businesswoman, whose grip on both family and business begins to slip. Zheleznova (played by Phoebe Nelson) is the owner of a shipping company who uses her wealth to hide the indiscretions of her husband, Sergei (Alex Moran), and is determined to maintain control of her family, keeping an eye on her drunken brother, Prokhor Borisovich Khrapov (Mitchel Sargeant), clashing with her emotionally wounded daughters, Natalya (Louise Pyke) and Lyudmilla (Alison Mitchell), and desperate to retain guardianship of her grandson when her dying son’s revolutionary wife, Rachel (Eleanor Ridgway), returns.

Politically, Gorky’s play, set in 1910, certainly shows signs of being caught between the failed 1905 revolution in Russia and the more successful February and October revolutions of 1917: its portrayal of Vassa seeks to both condemn the wealthy bourgeois family as decadent and yet there is an element of sympathy for Vassa as she has been forced into becoming ruthless as she thinks she is doing the best for her family. There is an attempt in this production, tightly directed by Teunkie Van der Sluijs, to address this ambiguity through Nelson’s portrayal of Vassa as she alternates between stern businesswoman and matriarch and allowing for moments where her mask slips and the audience get glimpses of the desperate woman beneath the exterior. More, however, perhaps could have been done to depict Vassa’s declining mental and physical health as the play progresses and Vassa is faced with obstacle after obstacle: from her husband’s threat of arrest for child molestation and her forcing poison into his pockets and advising him to kill himself to save the family from dishonour (which he does), through to trouble at the docks (striking workers furious at being underpaid and ships being impounded with extortionate release fees attached), and the final hurdle: furious shouting matches with Rachel who decries Vassa and the family as relics who will be swept away by a more successful revolution.

Elsewhere in the cast, Mitchell gives an enthusiastic portrayal of the childlike Lyudmilla, while Sean Prior impresses as the soldier Pyatyorkin: his jester-like exterior hiding a more ruthless desire for wealth which he thinks he can obtain by marriage to Lyudmilla. Emily Park has a suitably ‘weaselly’ element in her portrayal of Vassa’s assistant Anna (who, unsurprisingly, is the first to exploit the failing health of her employer) although her vocal projection could have been a bit stronger, and Sargeant brings an air of arrogance and self-entitlement to Prokhor (and frequently seemed to be doing a rather apt impersonation on Boris Johnson in his vocal delivery). Jonathan Taft, as Natalya’s would-be suitor Evengy Melnikov, does the best he can with a role which is essentially written as ‘well-meaning man” but he seemed far too nice to be associating with such a morally bankrupted family (which, one would hope, is the point). Moran is given a small amount of stage time as Sergei, but he conveys the character’s debauched essence well enough, and Daniel Healiss as Vassa’s ‘fixer’ Melnikov and Patrick Pearson as Krotkikh provide solid support. As Rachel, Ridgway provides some passionate delivery in her speeches railing against the bourgeois order, but frequently her scenes with Nelson degenerate into shouting matches (this may be more of a fault with the script rather than direction or performance, however). Finally, Pyke portrays Natalya as a spoilt, manipulative brat, which is exactly how the character is written, although perhaps more could have been made of Natalya’s “femme fatale” potential (the play’s plot certainly bears some common ground with the 1945 film of Mildred Pierce and a recasting of the play in the 1940s with a film-noir style could be interesting).

Visually, the production is of a high standard with costumes which recall the turn of the 20th century, and the use of rostra upon which Vassa’s desk and safe sit, allowed for some interesting physical placements on different levels, in particular when Vassa and Rachel clashed. What made this production stand-out, however, was the use of a live drum kit positioned downstage right. Played by Moran, the drums provided a startling opening to the play and served to score transitions between scenes or underscore tense scenes, becoming the beating of Vassa’s heart as the stress of losing control begins to take its toll. A musical set-piece as the family and their friends celebrate while Vassa is dealing with business at the docks was fantastic too – with superb singing from all and great guitar playing from Healiss (who doubled as the play’s musical director) and a valiant attempt at Russian folk dancing from Prior.

Vassa Zheleznova is not without its shortcomings – the play descends into melodrama as it goes on and Vassa’s fate seems to come out of nowhere – but these shortcomings seem to be more down to the script. The play’s final image, of the family raiding Vassa’s safe and desk as she lies slumped in an armchair, is striking and would undoubtedly have echoed similar scenes in St. Petersburg during the 1917 October revolution. All in all, this production of Vassa Zheleznova was a solid, perhaps ‘traditional’, staging of Gorky’s play. The music and set added an interesting dimension and the performances made the most of the material they had to work with. A valiant effort from all involved to bring to life a politically ambiguous script.