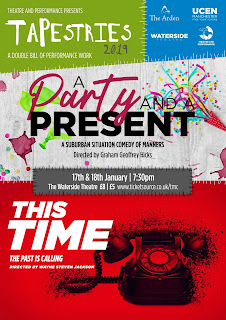 'Tapestries' because the two plays in this double bill were performed by students on the BA Perf Arts course in Theatre And Performance (geddit?). The plays were performed in The Arden's very own Waterside Theatre just behind Manchester's Gay Village in The Sheena Simon Campus.

A Party And A Present

The first play, 'A Party And A Present' was performed by the course's first year students, and this was their first public performance as a class - all 27 of them! It was obvious that the style of performance for which the TaP course is renowned was still a somewhat foreign concept for some of them. The course aims to allow the students to find their own theatre genre and performance styles bringing live performance into the 21st century in their own unique ways placing a huge emphasis on the routes taken and rehearsal processes for them to formulate and create their own performances. This probably explains why this particular play was rather fragmented and non-linear with quite a lot of too-long pauses between vignettes.

The basis for the story was Mike Leigh's 'Abigail's Party', a play which grew from group improvisation and devising in the first place, and so rather fitting that this text should have been chosen to extemporise further. What was most interesting (since I know the original play quite well) was which scenelets and themes they chose to develop and present and which they chose to bypass. The two themes which came across the strongest were the roles and stereotyping of gender and that of conflict - keeping a British stiff-upper lip and a constant calm smile in the face of adversity.

Overall it was a hugely enjoyable piece with some well-placed humour and balloon flights! An interesting and unconventional start to the play had the cast greet the audience in the foyer and have us introduced as a party guest upon taking our seats. What made this even stranger was that the cast were clad in black underwear (the boys bare chested) - and standing in a very cold and frosty January unheated space gave this simple action an almost unearthly quality and set the tone of the show as being off-kilter and bizarre right from the start. [once on stage they all - boys included - put on dresses, lipstick and fake moustaches!]

Indeed, this was no ordinary show, and many of the Theatre And Performance trademarks were already being evidenced in this collaboration between director Graham Geoffrey Hicks, the original script, and the cast. Combining live music with dancing and performing, this was a highly energetic, off-the-wall, humorous but very intelligent mash-up of the more famous text. I enjoyed the use of the TV monitor as well as engaging the audience and incorporating them into the 'party' on occasion. It was however, for me at least, a little too long and drawn-out with perhaps too many excellent ideas left un- or under-developed.  An absolutely excellent first performance though from a rather large group. I am very much looking forward to watching them develop over the course of the next three years.

'This Time' is a devised piece of theatre curated and directed by Wayne Steven Jackson. The play has just completed a short TIE tour locally and is performed by students in the second year of the TaP course.

All wearing grey, in costumes evocative of different decades of the last 100 years but yet all barefooted (odd), the cast took us on an emotional downward spiral with little hope. The premise of the piece being that a telephone is ringing - an insistent and annoying sound - and when answered there is a message being passed on from one bygone era to the next. Whether or not we heed this message is left unsaid, but in all probability the answer is no; hence the need for the play to pass the message, a warning, on to the next generation in the hope that they will heed it!

The world is rotten. Not only have each member of cast suffered their own personal tragedies in their life, but on a world scale there is tragedy and suffering everywhere. War, famine and disease have ravaged the world's population over the years, as well as intolerance, injustice, inequality, and lack of freedom. However, after listening to each of the casts' individual stories and cleverly weaving them into one global telephone answering message, it is clear that the past have made them who they are and stronger because of it.  Without evil, good cannot exist. Without famine there cannot be plenty.

There was some creative use of lighting and sound in this piece which sustained the interest in what was otherwise a rather gloomy and slow-moving piece with little or no respite. It's a bold piece of theatre; brave and stark in its telling, but it lacks something too - it lacks warmth and a ring of truth. It was all very staid and metallic - a little like the telephone ringing itself. It lacked humanity. Maybe that was deliberate; a specific alienation effect (not Brecht's!).

Each cast member wore a small item of jewelry or clothing to signify their character and the decade which they represented. I hadn't noticed this, nor did I see the significance of this until they were taken off mid-performance. Perhaps if they had all been a different (but alike) bright colour to contrast with the grey costumes, this would have made them stand-out and have more significance? Maybe this idea could have been developed a little further too creating more defined and relatable characters.

It was a reflective, though-provoking, but also very indulgent piece of theatre. I felt mentally drained after watching it, and it was a 60 minute piece performed through. The cast of 10 were sincere and grave in their approach to this piece, and I felt that some of their stories were perhaps very real experiences they themselves have undergone, making it a very personal journey for them as well. I applaud their integrity and honesty of performance.

The telephone's ringing is an obvious metaphor for the ticking of the clock, the passing of time. The past has happened for a reason,. so that we can learn from it and grow stronger because of it (both on a personal and universal level). What would you do given the chance to change things? The telephone is ringing. Will you answer it?