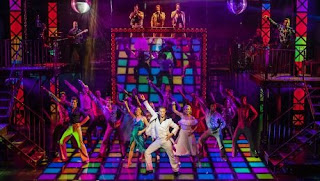 For anyone old enough to remember, then the 'disco culture' of the mid 70s was huge. Night clubs were seedy sex joints back then and the place to be for any teenager was at a Discoteque dancing known and rehearsed choreographies to the vocal sounds of singers such as The Bee Gees - who, more than anyone, popularised the sound and so it came as no surprise that when, in 1976, a film was to be made to glorify this dance phenomenon, it was the music of The Bee Gees which ran through the entire soundtrack making songs like 'Stayin' Alive', 'How Deep Is Your Love', 'Night Fever' etc the only songs (and dances) on our young minds.

I remember myself trying to be Tony Manero / John Travolta, and looking back now cringe with embarrassment at the thought - but then that was the 70s and it was soooo cool then!

The story of Saturday Night Fever concerns a young man, Tony, an Italian American living in Brooklyn. He is at odds with the world, and somehow can't get along with his staid and out-of-touch religious parents, nor can he find satisfaction in a dead-end job and the thought of a boring future. His only release is the time he spends at the local disco where he really does become somebody. He has a talent for dancing and his talents certainly do not go unnoticed by the females who are regulars there too. His dancing is his release and his passion. A competition is announced that a large cash prize will be awarded to the best dance duo, and of course Tony will enter this, but who will be his partner? He starts off with his old flame Annette, but there is a new girl in town and she is a brilliant dancer, but also very aloof. The story is a mix of Grease and West Side Story, and offers no surprises, but we hung on to every word, every dance move, every cut of the cloth when we were teenagers.

Fast forward to the present, and a stage show adapted from the film comes to town. How could I not go? How could I not feel the thrill again? This was going to be fantastic.

The reality however was somewhat less impressive than my expectation - or least my memory. In the stage show, produced and directed by Bill Kenwright, the dancing was stunning and was just as good or maybe even better than the film. The choreographer, Bill Dermer had taken many of the iconic moves from the disco era and of that film in particular and made them his own, and the whole was creative, and absolutely bang on!

If I had not already known the story-line though, I think I would have been struggling. the scenes were very short and swift with flats being flown in and out, and a very 'West Side Story'-esque use of metal steps and platforms but the scenes were not long enough or deep enough for us to understand the individual characters, to know a little about them and their history, and the dialogue was facile and emotionless. We were not able to emote to the characters as they were given so little in terms of script and directing in order to give us what we needed, and sadly the on-stage chemistry between any of the cast this evening was next to nothing. The whole was crying out for some insightful and imaginative directing, coupled with more exposition and a chance for the actors to show us their characters' depths. Maybe not surprisingly, but the only moment I felt truly connected to anyone on stage this evening; the only moment I felt that the emotion was real, was during Tony's solo interpretive dance after the suicide of one of his friends in the second act.

I liked the idea of the three Bee Gees standing high above the stage and singing their hits when the cast were dancing, but I would have liked the cast to have done more singing too, when not actually engaged in the disco.The three singers who sang all evening need to be credited here though, for they really did actually sound like the famous band they were tributing. They were Edward Handoll, Alastair Hill and Matt Faull.

Richard Winsor played Tony, and he had the moves, the look, and certainly the dancing ability, but the dialogue and that certain 'je ne sais quoi' needed to transform from page to stage were missing, not just with him but with the whole cast sadly. The production would also have benefited greatly from a dialect / accent coach. I don't see one listed in the credits. I commented on my way out that if they had made the story into a ballet using this cast then it would have worked much better - the whole cast seemed more at ease and at their best when wearing their dancing shoes.

Flash, brash, and playing it for the middle-aged women, was the general modus operandus in this production, and without the superb dancing then the show would have been an utter flop. The film will still hold a special place in my memory, and my middle-aged self will just have to be content with that!