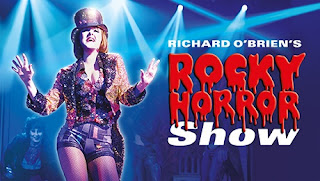 It's astounding, time is fleeting, madness takes it's toll..... yes it's time to see what's on the slab again in Manchester as the latest version of this ever popular cult classic hits the city. It's very much tongue-in-cheek, sexy, sassy, and glam-rock kitsch, and it's peopled with off-beat androgynous creations of fun and fantasy.

I say 'latest version' since there are one or two changes here -  slight ones - ones you wouldn't perhaps notice unless you had seen all other previous incarnations - but there nonetheless. The show feels a lot snappier and swifter than before, but unless you actually know the story-line (and lets face it..who doesn't?!) you might have had a little trouble in keeping up with it - especially the final sequence of the first act which condensed at least three songs into one and had Frank singing about making his man long after he had already been created.

However, for Rocky virgins (you mean she's a....? ) the story is an irreverent and camp Mickey-take on the once popular film genre of Sci-Fi B-Movies. In creator Richard O'Brien's own words, it was a bit of fun, never really meant to be taken seriously; a cross between The Carry On films and Hammer House Of Horror. Brad and Janet are on their way to see their college lecturer friend Dr. Scott when the weather turns unexpectedly inclement and they suffer a flat tyre. They see a house in the distance with the lights on, and so walk over to ask for the use of their telephone to call for assistance. Little do they know that the weather and their arrival at this house was engineered by the house's rather unusual residents - transvestites and sexual deviants from the planet of Transexual in the galaxy of Transylvania.

The audience this evening were much more subdued than I remember from previous times - even those deciding to come in costume were not as plentiful. Maybe the more stringent and rigid door controls have put people off, but that's a shame since the show works best when it works both ways. For those uninitiated, then there have become many standardised and recognised audience responses to much of the show which thankfully at least one man with a loud voice managed to interject most of - as well as some rather crude ad libs too, which were dealt with with aplomb, alacrity and a deal of sarcasm by Beverley Callard who made the most out of her role as Narrator.

Stephen Webb luxuriates in his role as Frank N Furter, and although obviously keeping the characterisation very close to the original, there were still a few unique touches in there which surprised and wowed. Kristian Lavercombe's Riff Raff was suitably obsequious. I loved his nimble quick flurries off stage, perhaps more could have been made of this move (?). Laura Harrison (Magenta) and Miracle Chance (Columbia) made excellent female counterparts and Callum Evans was the most energetic and gymnastic Rocky I think I have ever seen.

Brad and Janet were played by Ben Adams and Joanne Clifton, and if I had to be in any way critical then I think they started the show a little too forcefully, and so their sexual awakening and transition from mice to men was perhaps not a stark a contrast as perhaps it should have been.

Ross Chisari played both Eddie and Dr Scott. I fully understand his wanting to 'ham it up' but his characterisation of Dr. Scott was, for me, sadly far too much over the top. A combination of Dr. Strangelove and a panto dame. I also didn't understand the need for the aliens to suddenly start talking in mock Transylvanian accents either - this seemed a little odd and forced somehow.

Perhaps I am being a little too critical, since the show is undoubtedly a huge crowd-pleaser from start to finish, and the cast do an amazing job of performing characters which are so well known that even the slightest deviation from the original could cause a riot; they managed to bridge this gap with ease and create a balance which worked wonderfully. It's a great show, quite unique and needs to be seen to be believed.

Are you ready to do The Time Warp?