REVIEW: The Rise And Fall Of Little Voice - The Albert Halls, Bolton 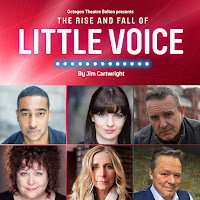 I would describe 'The Rise And Fall Of Little Voice' as a 'kitchen sink drama with big dreams'. Set in the working class home of Mari and her daughter Little Voice, we see a struggling relationship between mother and daughter after the father has died. Little voice has become quiet, insular and reclusive, listening only to her late father’s record collection whilst perfecting incredible impersonations of iconic female vocalists on them. Her mother, Mari is an obnoxiously loud character, looking for another man to fill the void in her life and bring her riches and a lifestyle she never had with her first husband.

Jim Cartwright writes about poverty and struggling relationships brilliantly. He encapsulates the bitterness of his characters with a pathos that can make you cry, yet still maintains an endearing wittiness, which can only leave you feeling entertained. This production presented by Bolton's Octagon Theatre was no exception, however there were times in the exposition of the play that it felt quite wordy as the mother and daughter immediately demonstrated their backward relationship with the loud, overpowering parent, who stayed out drinking and the calm, daughter who stayed home to listen to records in her pyjamas. It is credit to Ben Occhipinti’s slick direction and a top notch cast, that the lack of action in the first half hour moves so swiftly forwards maintaining a sense of energy that doesn’t miss a beat.

Unlike the usual Octagon productions, performed in the round, this production is performed on an end-on stage, with the audience in front of a raised stage. The set was an incredible recreation of the interior of a two story house: complete with stairs, a wooden frame of walls, window frames and doors. However, the walls were bare, with no plasterboard colour or filling, creating a scruffy see through effect and enhancing the sense of poverty in the story. The use of the set was an integral part of the play with the split level being shown throughout as we see the juxtaposition of the loud mouthed mother in the downstairs kitchen, whilst her daughter is in the room directly above her, hugging her records for comfort. It was an absolute delight to see the contrast to the social club scenes with a glitter curtain surrounding the house, a fabulously simple design concept with a huge impact.

The cast of 'The Rise And Fall Of Little Voice' were incredible. There wasn’t a weak link among them, with each one performing like the star of the show, you knew you were watching something really special. Little Voice, played by the astonishingly talented Katie Elin-Salt was skilfully subtle in her earlier scenes of the play and you couldn’t help but feel empathy for the lonely, quiet girl. Her transformation into the singing sensation was both spellbinding and terrifying with her frenzied sense of movement and vocals. Her singing impersonations were captivating and so skilful but, seeing the transformation from the earlier scenes you just wouldn’t believe such a voice could come from the meek girl from upstairs. A real talent to behold onstage but her final scenes of the play really proved her acting prowess can go the full circle from meek to powerful and from sane to manic, just mesmerising!

Mari, Little Voice’s mother was played by the equally capable Sally George. This is one of the most challenging roles to play, with the lion’s share of the dialogue of this play, George created a monster of a character with a vivacious energy from start to finish. Her selfish, un-maternal characterisation was kept fresh with her lust for life and uncouth mannerisms in her relationships with everyone on stage. Sally George made the audience laugh, cry, love her and then hate her: something only a very talented performer can do in two hours.

With a cast of only six, the supporting roles were equally charismatic, played by four experienced and well-known names who all gave compelling performances, despite having to concede the limelight and stage time to the principles. There was also a band who accompanied Little Voice as she transformed into the singing sensation. The band had a lovely rapport with Mr Boo, the compere of the social club played by Ted Robbins.

The Octagon Theatre is currently undergoing a complete overhaul and so this production was performed at the Bolton Albert Halls. This was the only downside, the venue. With a wedding party taking place downstairs, the bass of the disco resonated up into the auditorium and added something to the atmosphere of this production which wasn’t purposeful and at times spoiled it, I couldn’t help feel a bit sorry for the performers and creative team, whose fantastic work was being tainted by something so insignificant. I can’t wait for this talented team to get back into their home once the regeneration project has been completed later this year.
Reviewer - Johanna Hassouna-Smith
on - 25/1/19
at January 26, 2019