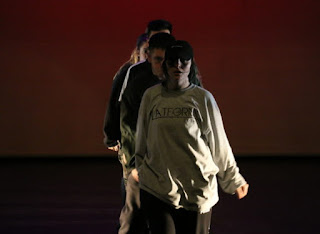 A highly charged crowd showed up for tonight's showcase of young talent. Part of Push Festival 2019, a variety of dance groups and spoken word poets explored the central theme of empowerment. Manchester choreographers presented their dance works in a show celebrating and encouraging the massive amount of talent which can be found in our city. This event had the backing of 0161 Dance Studio.

Empowerment is a term which has been spoken and written about frequently, in various contexts, in the current socio-political climate. So, the first question I had was how would this be explored and focused through dance and spoken word? I was incredibly interested to understand what young people think about when it comes to empowerment. The result was wonderful, inspiring, and complete. I was able to create a mindmap outlining the different subject areas of empowerment in my notebook.

In this show, empowerment was deconstructed referring to the dictionary definitions. Firstly, the power given to someone to do something. Secondly, the process of becoming stronger and more confident, especially in controlling one's life and claiming one's right. Empowerment in all senses of the word whether it be personal, professional, to do with women, men, confidence, friendship, or unity. The authenticity of young people's voices, opinions, and thoughts was always present and well captured.

Structurally, the series of dance routines were broken-up with spoken word segments. The writing was expressive, rhythmical, and emotionally intelligent. One of my favourite lines was: "We are black queens" - a celebratory comment on race and diversity. Let's go to the dancing. Stylistically, there was hip hop, street, and contemporary dance. There was lovely contrast in pacing and visual ideas in the choreography like at one point when all the dancers lined up, holding hands, to demonstrate a united front. Explosive sections in dance routines were exactly that. The talented performers gave it their all dancing to choreography which was tight, sharp, and intricate. Choices in costume were reflective of various cultures, sub-cultures, and personalities.

In the audience tonight were many families and friends of the performers. It was a supportive and dynamic crowd. They were extensively more active than the audience in some of the plays I've been to, where they were essentially passive. This added so much to the excitement and meaningfulness of the event. It was brilliant to see a range of children and young people up on stage, including BAME* dancers.

Towards the end, I was thinking this wasn't just a dance show, this was life itself. It was young Mancunian people expressing, shaping, and developing themselves. Their voices were been listened to. They were given the opportunity to say what they wanted to say about the world. The event itself empowered the young people and choreographers involved - nurturing a sense of belonging, community, and joy amongst everyone. Meaningful, impacting, and amazing dance theatre.