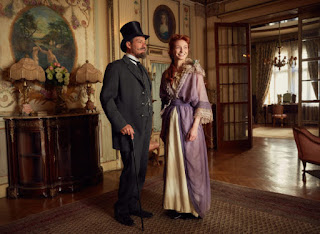 It is 1892 in the rural French town of Saint Sauveur and a well-to-do Parisian suitor who goes by the name Willy has come to meet the love of his life, a feisty young lady called Sidonie Gabrielle Colette. Against a backlash of Parisian high society disapproval, they marry and become a very good 'team'. Willy is a critic / writer / entrepreneur and somewhat ruthless, whilst his new wife's talents are evidenced by her writing skills. Prompted by financial ruin and the bailiffs at the door, she is tasked into writing from her own experience and to her and her husband's astonishment the public go wild for her first novel, 'Claudine A L'Ecole'.

Despite Willy's infidelities, and his strict and authoritarian ways, it is obvious that Gabrielle, who has now changed her name to Colette, (since the protagonist in her novel is obviously her), still love each other. It's unconventional for the period in which the film is set, and certainly this gender-crossing scandal would have caused outrage and approbation in equal measure amongst Parisian high society, but despite the film's best efforts to not shy away from this and contextualise it by director Wash Westmoreland, it still seemed very weak and ineffectual to our modern zeitgeist.

Colette however proves to be the stronger willed of the two, and eventually,  after a tumultuous lesbian affair with a married American lady (and finding out that her husband has also been having an illicit affair with the same lady!), and fast-forwarding several years, after a second Claudine book has been published and their success is guaranteed, she decides to take up acting. Rejecting the idea of writing another novel she tours with a second-rate theatre troupe with her new lover; a lady of high society and thought of as being very avant-garde and daring since she chooses to dress like a man.

This is a biopic in the true sense of the word, a film biography of France's most celebrated female author, and indeed it is a story of our time. In a world where women are fighting for recognition and equality, this is a timely entry into the film world. However, the film does feel rather laboured and 'theatrical'. Watching it I felt that what I was watching was a 're-enactment' rather than the real thing. A very strange feeling, and one I cannot quite explain, except to say that I was not fully engaged. The acting was exaggerated, almost as if I were watching a stage play, and the lack of action and dynamic changes in the film made it rather bland.

There are some lovely lines in the film, but again, these felt like a theatrical device rather than something a person would actually say in real life. For example, 'It's the hand that holds the pen that writes history'.

Starring Keira Knightley as Colette. I have to be honest and I run hot and cold with Knightly as an actress. In this particular film however, she is perfectly acceptable. I would not say that it is her best work - maybe that is still to come from this actress - but the theatricality of the script and directing suits her style of acting. Dominic West however shines as a lascivious and conniving businessman; the toast of Paris one minute and the sadistic malevolent miserly womaniser the next. His changes between masterful and gibbering child are superbly measured.

A truly fascinating story, but for my money, poorly told.