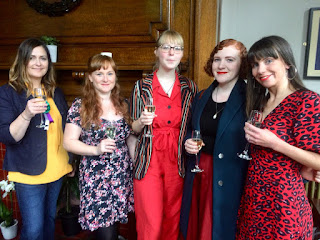 Five lucky playwrights from Greater Manchester have seen their works take quite an incredible and inspirational journey so far. Way back over the balmy summer of 2018 BBC Radio Manchester in association with The Royal Exchange Theatre launched their first ever WRITING TALENT SEARCH.- a search for local writing talent with one aim in mind, that of to mark the centenary of women winning the right to vote. There were only really two rules in order to enter this competition; the piece of writing had to reflect the voice of women in the city, and that the piece could be either a poem or script but intended to be performed by only one person, and The Manchester Monologues were born. A panel of judges from Radio Manchester, The Royal Exchange and the profession were called in to decide the five winning entries and in September these 5 monologues were performed at The Suffragette City event at The Royal Exchange.

Armed with the above information I was extremely keen to learn more. I had not seen any of them yet, and so I tuned in to BBC Radio Manchester to listen to what I had been missing.

The five monologues were all quite short - in fact in the half hour programme, we heard all five in their entirety including introductions etc. And I think what surprised me the most was not how powerful, emotive, inspirational, moving, evocative, or whatever other adjective they all had ascribed to them by the judges they were, but how surprisingly similar they all were. All five, although attacking the subject from disparate angles, were all serious, thought-provoking pieces which all ended with the same message... women are just as strong, just as capable, just a respect-worthy, just as clever etc as men - in fact we are equals - and so not only do we wish this to be accepted and understood but we intend to make sure that it is.

Mostly taking their inspiration for their works from either personal experience or anecdotes of family members, we heard first, 'A Girl Like You' by Catherine Antrobus and performed by Chrissy Bone. This tackled not only the issue of gender but also that of colour too as a black lady in her 40s waits for her daughter to come out of school and recalls her schooldays and being told 'no', and her hope that her daughter will only be told 'yes'. "You can't feel colour; but you can see it".

Following this was 'Dreams For Our Daughters' by Boltoner, Pegeen Murphy. Reading the monologue herself she recalled the story of Emma, now in her 40s but remembering the times she sat on the school bus and the hierarchy at play. Emma is 14, and pregnant, and gains nothing but sneers, sniggers and calls of 'slag'. She imagines her retort to those comments. The only poem of the 5 followed this, with Hayley Doherty's 'Emmeline's Army'. Doherty performed her own work and in this strong and strident poem, she took the red pillar box that withstood the IRA bombing as her starting point and turned this into the voice of defiance and her watchcry for all Manchester women who speak with northern vowels and drink tea.

Libby Williamson's 'Jazz 24' followed this. A monologue about a young lady who has had enough of falling into habits and routines of looking after, shopping for, washing for, and basically babysitting her boyfriend. Actress Leah Marks read the piece and perhaps this of all them, had the most ambiguous ending. Is she leaving him for good or does she intend to come back (but on her terms?) A tunnel in her train journey interrupts her mobile conversation. Finally we heard 'Hand To Hand Combat' by Jayne Marshall. For me the one which was the most theatrical, and therefore perhaps also the most powerful. A woman stops as she witnesses a man shouting abuse inches away from a poor young lady visibly recoiling from it but seemingly unable to defend herself. Passers-by are laughing, videoing or ignoring the altercation, and so she stops and intervenes with an unexpected but poignant and surprisingly strong outcome. This play was read by Verity Henry.

Congratulations to the five winners, and although I have no idea what will happen to these pieces now, I hope that they will still have a life and continue to inspire others. I have heard it said a few times now that 2018 was the year of women. Does that mean that now we are in 2019, all of that will stop? I certainly hope not. This is the year of building on 2018's foundations and continuing to educate and inspire.