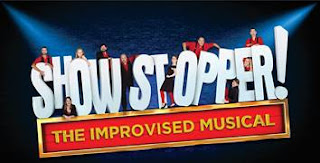 The critically acclaimed improvisational frontrunner Showstopper! The Improvised Musical heads out on a UK tour again for more entertaining dates throughout 2019. Following on from their sell out run at The Edinburgh Festival Fringe 2018, and with a 2016 Olivier Award for their West End debut at the Apollo Theatre, The Showstoppers made 2018 their best year yet.

Now, The Showstoppers are set to make 2019 even better, one new musical at a time.

No two nights are ever the same as The Showstoppers take audience suggestions and then spin a brand new comedy musical out of thin air - stories, characters, tunes, lyrics, dances, harmonies and all - with unpredictable and hilarious results. If you’ve thought improv looked difficult before, try doing it in time (and tune) to music!

Having grown since 2008 to become the UK’s most acclaimed and in-demand musical improvisers, The Showstoppers have become a must-see staple of the Edinburgh Festival Fringe. With five West End seasons and an acclaimed BBC Radio 4 series to their name, they have also taken their ingenious blend of comedy, musical theatre and spontaneity around the globe, picking up accolades and awards including The Times Best of the Fringe, Mervyn Stutter’s Spirit Of The Fringe Award and nominations for Chortle Best Music Or Variety Act, MTM Best Production Award and MTM Judges’ Discretionary Award. 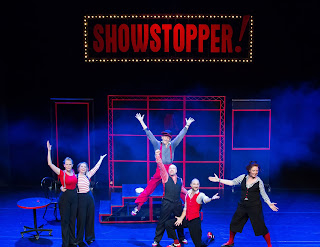 Here, company member and Co-founder Adam Meggido, an award-winning writer/composer who has improvised at the National, The Royal Court Theatre, Shakespeare’s Globe Theatre and currently holds the world record for the directing the longest impro show - 55 hours without a break, answers some of our questions......

Can you tell me what the audience can expect from the show?
A musical! With catchy songs, dazzling dance routines, sweeping storylines and hilarious characters. The only difference with our show is that EVERYTHING is entirely made up on the spot out of audience suggestions. It’s all 100% improvised.

What inspired you to develop the concept of Showstoppers!?
About ten years ago, some of us were working with the great theatre maverick Ken Campbell. Ken was inspired by a troupe he had seen in Canada called Die Nasty. He said their improvisation was so slick, entertaining  and impressive that it was better than a great deal of scripted theatre. We decided to do the same with a musical. The Showstoppers love musicals - and we love improvisation - so this project was a perfect fit for us all!

…and how did you all meet?
Some through Ken Campbell, some through Dylan Emery (co-creator/director of Showstopper!). We are an eccentric rag-tag bunch of misfits and oddities and somehow that works perfectly for this show!
Is there a recipe for good improvisation?
The basic principles are actually quite simple. The rest is practice. Its mostly about listening. Real listening. Listening to each other’s ideas, agreeing with them immediately and building on them. For Showstopper of course we have to know our musicals so a huge amount of hard work is part of that recipe too.

I imagine that a strong relationship between the cast members if fundamental to the success of this show. Can you almost second guess each other's responses?
Sometimes yes. But often the real fun is when we clash and don’t quite catch what’s happening. The audience sees everything of course so they enjoy seeing these clashes and wondering how we are going to get out of the trouble we have put ourselves in! The relationship is not just between performers but also the band, our lighting operator and of course, the audience. (Don’t worry - there is no awkward, forced audience participation!)

Do you have back-up material that you can pull out of the bag if necessary?
Nope. Never. It doesn’t help to do so. Trying to plan anything in advance actually makes it more difficult to improvise. It’s genuinely easier to stay calm, present and be in the moment. Riskier - yes - but ultimately that’s how the show is created.

Apologies for the cynical tone of this question, but do you ever get accused of planting audience members with specific requests?
All the time. There are some people who will never believe its improvised. I guess it’s a compliment in a way. After all, we set out to create a show that doesn’t look improvised. But what can we say? It honestly is entirely improvised with no plants or stooges. Some people have seen the show 50 or 60 times! they would have said something by now if they thought we were cheating. Anyway, where’s the fun in having plants in the audience? We genuinely want to be challenged.

How much of the success of the show is rooted in the tension created by the feeling of ‘will they mess up’?
The element of danger is essential. It’s essential in all love theatre but often lacking. Well. you’ll get it by the sack full in this show.

Are you all risk takers? I’m guessing the answer is yes…
Not all of us. But put us on a stage together….

How hard do audiences try and bamboozle you with outlandish suggestions?
A great deal. Usually the ideas are not as imaginative as they initially think. Setting our show 'in a toilet' or 'on the moon' sound outlandish until you realise 1) everybody says it so it’s not very original at all and 2) it would be interesting for about 2 minutes and wouldn’t necessarily sustain a 90 minute show. We ask the audience to try to dream up their best ideas and come up with something genuinely inspiring that makes a great musical. Having said that, if you really want it set in a toilet on the moon, we’ll do it!
You’ve created so many musicals. Any favourites?
Ahhh so many… I enjoyed a musical called Don’t Look Down about couples who go white water rafting as a kind of therapy. I also enjoyed ‘The Lyin’ King’ - a story about a newspaper editor (our opening night at the Apollo in the west end). Maybe, with your help, our favourites will be the night we’re there!
Showstopper! The Improvised Musical will be going to theatres around the country and on to The Edinburgh Festival Fringe in August. For more information and tickets visit: http://www.theshowstoppers.org/upcoming-shows/
at January 04, 2019