REVIEW: Women On The Verge Of A Nervous Breakdown - The Waterside Theatre, Manchester. 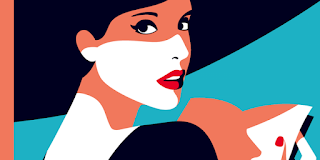 Before I even start to comment on the Musical, I just want to say how pleasantly surprised and pleased I am that The Waterside Theatre is now looking much more like a small-scale commercial theatre, and being recognised outside of The Arden and Manchester College, where the theatre resides at the top end of The Sheena Simon Building. For years this theatre has been an anonymous and unknown place, inhabited by students only, but now, under the current management team they are really making this theatre and the companies that use it - UCEN and The Arden, as well as visiting companies, see it recognised as a lovely rival to the already existing plethora of Fringe theatres in the city.

Today I was there to witness The Arden's BA Musical Theatre Third Year students perform the intriguingly titled, 'Women On The Verge Of A Nervous Breakdown'. I was aware of the film of the same name by Spanish director Pedro Almodovar, but have never seen it; but was not at all aware that a musical version of this film existed, and so this was a complete first for me.

With music and lyrics by David Yazbok, with the book by Jeffrey Lane, and obviously sticking very close to the Almodovar film, the story tells of 5 women who are most definitely on the verge of if not already in the middle of nervous breakdowns!  We are in Madrid in the late 1980s, and the cause of the ladies' troubles is Ivan, an ageing voice-over actor with a fondness for philandering. His wife, suddenly after an agreed 19-year separation, decides that she is going to take him to court for neglecting her and his husbandly duties, despite the fact that she was  hospitalised for a time due to mental instability. His long-time mistress, Pepa, also works as a voice-over artiste and the start of the show sees her listening to the news that Ivan is leaving her. The third woman to be entangled with Ivan, and bring herself to a near nervous breakdown state because of it is a female lawyer, who is acting on behalf of his wife, thus creating a whole conflict of interests and she has to decide in the end which path to follow. The fourth woman in this maelstrom of emotion is an insecure model and best friend of Pepa who is constantly falling in love. This time however, she has found herself a terrorist boyfriend and now she fears for her safety. Her neurosis and selfishness combined with an unbelievable amount of ignorance, take her to the edge. Finally, it is the long-suffering fiancee of Carlos, Ivan's son, who finally at the end of act one, along with the other women, admits that she too, is 'on the verge', as Carlos refuses to consummate their relationship, and dithers about marriage.

The musical is full of lovely humorous lines which are not lost, but played superbly by this very talented young cast. In fact, the thought struck me that performing this musical with a cast who could only be very early 20s at the most, brought about a very interesting but vital dynamic to these characters who would be, if played true to age, all in their mid-forties. A further thought led me to thinking that this musical is also a superb choice for today's #womenintheatre and #equalrights movement as the protagonists are all female and indeed, the whole musical employed only three male roles in a cast of 27!

This was a stella cast, and the principals brought a maturity and sensitivity to their roles rarely seen by students, and it was certainly one of the more enjoyable and professional Musicals I have seen performed by Arden students.

Jessica Shaw's portrayal of Pepa was nothing short of West End worthy, whilst she was more than ably supported by Will Winsor as the ageing and wayward lothario Ivan; Sally McNeil as the domineering and neurotic Lucia, Ivan's wife, looking and sounding like a middle-aged Julie Walters; Bonny Dinsdale as the ditsy model-with-issues Candela; Elizabeth Hayward as a respectable lawyer with a yearning for sexy adventure, Paulina; and Roger Monks (Carlos) completing the principals as Ivan's son - very awkward in the sex department, but after a laced gazpacho, shows his interest with Candela rather than his fiancee, Marisa, played with a certain stubbornness by Katie May.

A special mention needs most certainly to be made of the three taxi drivers (Danielle Preston, Sarah Reilly, India Burnton) who work in very much the same way as The Ronettes do in 'Little Shop Of Horrors', advancing the narrative and offering opinion Greek chorus-like. They did an amazing job, and their voices were superb, especially the smallest of the three with a soprano powerhouse voice! I should also like to mention Chloe Hall, who played the part of the doctor. Such a shame she had such a small and somewhat insignificant part; I would have liked to have seen more of her; her acting was impeccable.

This was a hugely enjoyable show, and will certainly look out for it again if it ever comes round. From what I can tell, there has only ever been one West End run of it back in 2015 and has never toured the provinces. Maybe it's about time it did. The story is fun, but rooted in emotions and situations which we can all easily relate to, and the music is superb, jazz, Spanish, and Latin based music throughout.

In this performance the show was directed and choreographed by Tim Flavin. I absolutely loved the telephones and the car chase sequence. Highly imaginative and brought a lovely personal touch to the directing. The music too was in very safe hands under Robert Purvis' direction. A high energy show, which is certainly not an easy one to do. The characters and the music are difficult I would imagine even for the hardened pros - and it is a rather frenetic and switching story-line. There was only one thing that I didn't understand; that being why the cast were asked to use pseudo-Spanish accents. Surely it would have been enough for us to have 'suspended our disbelief' that we were in Spain and these people were Spanish, and used standard English? I didn't see the necessity for this nor what it added to the show.

A hugely enjoyable Musical, performed by a very talented and energetic group of final year students. - well done to all, including the chorus who i have thus far neglected, sorry! I hope to see you all on the West End soon!