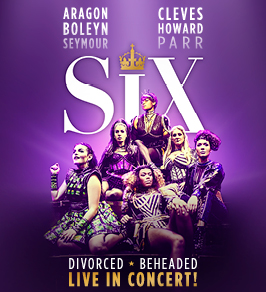 'Six' is a concept musical; the concept here being; what would happen if the six wives of Henry VIII were all to come back to life in the present day and form a girl-band? - This!

It's a pop concert of a musical which imparts historical information as it goes along; so who said pop music cannot be educational?! We start with a sassy unison piece; the premise being, the audience are invited to vote for which wife they like the best. - 'like' being a purely subjective word and could be interpreted as 'sympathise', 'enjoy the performance of' or anything in between. In turn, each wife then has a solo song in which they pour their heart out and tell us who, how, and why they came to be his wife and in 5 cases, end up an ex-wife.

It's fun, it's sassy, it's up-beat, it's modern, it's sexy, it's clever, but above all it's a highly intelligent and wonderful way to make history appealing for youngsters. The six wives were flawless in their delivery. Their singing, their dancing, and their on-stage chemistry were second to none, and it was a joyous and highly energising show. You could feel the audience's anticipation and the whoops and screams from the audience throughout was very pop concert-like and there was such a wonderful atmosphere in the auditorium right from the very beginning of this 75 minute show - a hugely positive and gleeful atmosphere which I have rarely if ever experienced in a theatre setting before.

The show was pitched just right - the comedy, the fun, the seriousness, the pathos, all in their right amounts with music which could easily have been found on any young teenagers' i-pod.  For me - a slightly older 'teenager' (a-hem!), I appreciated the lovely addition of the 'Greensleeves' theme in the opening song. Will we ever find out if King Henry did actually compose this or not I wonder...!

Jarneia Richard-Noel (Catherine Of Aragon), Millie O'Connell (Anne Boleyn), Natalie Paris (Jane Seymour), Alexia McIntosh (Anna Of Cleves), Aimie Atkinson (Kathrine Howard), and Maiya Quansah-Breed (Catherine Parr) were all equally excellent and their vocal techniques and harmonies breathtaking. In her final song, just when I thought Quansah-Breed couldn't get any higher, she did, and it wasn't the operatic soprano screech either, it was a controlled rock voice which almost brought the house down!

The band - again all female - Arlene McNaught, Alice Angliss, Amy Shaw and Terri De Marco were excellent too, and were on stage and visible all the time, along with a central staircase and many flashing lights to add to the pop concert feel. The costumes were a mixture of mock Gothic, pantomime, and a slight concession to the Tudor age from which they originated here and there. An odd mix, but somehow it worked! Directed by Lucy Moss and Jamie Armitage (the only male in this Girl-power production!), and choreographed by Carrie-Anne Ingrouille, there was hip-hop, street, commercial, and a whole lot of audience manipulation which we absolutely lapped up and screamed back at them in pleasure.

I have never been to a pop concert in my life - I think I just have, and I could easily go again and again! 'Six' might be the name of the show, but I give it a TEN!