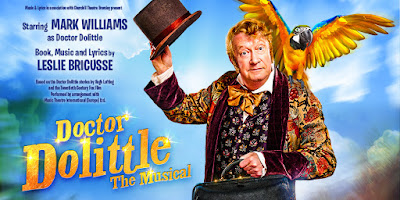 With the promise of magic and enchantment galore, The Lowry Theatre's big Christmas bonanza of a show this year is Leslie Bricusse's musical of the familiar 'talk to the animals' Doctor Dolittle.

The original 1967 film for which Bricusse wrote the score was awash with problems and financial hardship, but eventually won the hearts of viewers, and sees Musical Theatre star Rex Harrison play the doctor, whilst Anthony Newley, Bricusse's protege, played the cockney Matthew, and a wonderful cameo for Richard Attenborough as the Circus Master. There is now even talk of Robert Downey Jr starring in a  new film version in 2019, so well-loved and known has this creation become.

However, back to this evening, and the eagerly anticipated stage show. The show follows the original film very closely. The fusing of three of the Dolittle books to make just the one story (as per the film) and the stage design (Tom Piper) paid homage to the fact that these stories were originally novels with a multi-functional book design with the changing scenery being the picture pages torn from the books. It worked, but was clever rather than aesthetic and functional rather than spectacular. Either side of the stage were two metal  2-levelled platforms on which the band played and the cast utilised, but I didn't see the need for them on practical terms or indeed how they fit in with the 'book' theme. I would have preferred the band to have been hidden, seeing their music-stand lights continually - even in blackouts - was infuriating.

The musical itself took a long time to get going. The first half was rather sluggish, lacking pace, and failing to keep majority of the audience fully entertained. Indeed, I did notice that several seats around me had been vacated when I came back after the interval! However, if they had only have stayed, the second act was much better, and the cast seemed to have found their missing pace and purpose. It was also the more visually spectacular of the two acts, with the Giant Pink Sea-slug even gaining a round of applause (quite justifiably!)

So, yes, let's talk about the animals. There were many and varied representations of animals this evening, some working better than others. They were, for the majority, puppets, but some of the larger creatures used a body inside a skeletal skin, such as the sabre-toothed tiger, which, for me, was the most realistic representation of all of them. The dog, the pig, the monkey, and his other constant companions throughout worked well with their handlers. It was obvious that a great deal of time and rehearsal had gone into trying to create movement and expression in these creatures some with much more success than others. Vicky Entwistle was the voice and co-puppeteer of the parrot, Polynesia, which for reasons best known to the parrot community spoke in a broad Lancashire accent.

Some of the images / tableaux were very well thought through and worked excellently. The two seals swimming in the water for example was a nice image; others though just seemed to lack inspiration or focus, and since the scenes were very swift, it was almost as if the thought process was. 'oh never mind, no-one will notice!' The circus ring was just a light projection of red and white on the back wall, whilst the picture book flowers for Sea-Star Island were very underwhelming for example.

The doctor was played by Mark Williams, who, very much like the rest of the show, only seemed to get into the correct gear for the second act. A friendly and personable persona but lacked a certain 'oomph' in the characterisation. More animated was Patrick Sullivan as Matthew Mugg. Placing his character half-way between a pantomime Buttons and a Romantic hero, this seemed like a lovely characterisation, and his onstage chemistry with both Williams and Mollie Melia-Redgrave as Emma Fairfax was a joy. Melia-Redgrave proved to have a beautiful and mellow soprano voice, and was very easy to watch. The young boy Tommy Stubbins [six boys alternate this role throughout the run and I don't know which one I saw this evening], was indeed excellent, for one so young his stagecraft and ability shone. He has a pet duck and goes to see Dr. Dolittle to see if he can help and ends up travelling with him on his adventure.

The cast of principals completes with Adele Anderson playing the dual role of Lady Bellowes and Poison Arrow, both roles requiring her to be pantomimically nasty, (her poor singing voice very much her downfall for Poison Arrow), and Brian Capron, again playing two roles as both the circus owner Albert Blossom and Dolittle's correspondence-friend and ally Straight Arrow. His clipped upper-class accent for Straight Arrow nicely contrasting with his more gruff and common money-orientated Blossom.

The whole show was nowhere near as colourful or as thrilling as I had hoped it might have been, nor did it really enchant in the way other children's novels' adaptations for the stage have done. It was a hugely ambitious undertaking, requiring so many animals and so many different locations - one of the original film's downfalls - and although solutions were found, there was not enough difference between them and certainly no 'WOW factor, except for the entrance of the snail. Even Dolittle returning home on a giant moth failed to elicit even the slightest gasp of appreciation this evening.

Final verdict: as one member of the audience was heard to mutter to their companion on the way out; 'That was nice, dear, but nice is about the only word I can find for it'.  Certainly child friendly, age appropriate and, yes, very 'nice'.