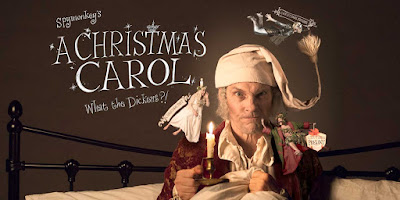 There’s a festive choice of Christmas shows in Liverpool this year from Scouse Panto to Rock and Roll so the Liverpool Playhouse commendably doesn’t even to try to compete but brings instead the silliest of the lot. Billed as ‘A Funny Flight of Theatrical Fancy’, physical comedy theatre company Spymonkey bring their own take on the classic Dickensian tale with uproarious results.

Opening, front of curtain, with the immediately recognisable Dickens, apparently to the surprise of Aitor Basauri (who was otherwise hilarious in the role) after asking the audience ‘Do you know who I am?’. Audience participation is instantly established with a resounding ‘Charles Dickens’ from a Liverpool audience who were ready to play. Just as well as the following Tom Foolery and general slapstick isn’t for everyone.

The stage within a stage set the production firmly in the realms of entertainment with no pretence at reality as doors wobble and curtain walls are frequently breached. Designed by Alice Power, the simple set is used to maximum advantage and easily transforms from Scrooge’s office to his bedroom and Bob Cratchit’s house without missing a beat. The well know story of a very un-festive Ebenezer Scrooge and hard-done-by Bob Cratchit working on Christmas Eve before Cratchit goes home to his family and Scrooge to his bed is maintained with a Victorian feel. The four cast gave the appearance of many more with swift costume adaptations and changes allowing scenes to move swiftly enough to keep the audience focused.

Costumes are also designed by Power and make an integral part of the performance with a great deal of emphasis on hats to represent characters. The opening scene is by far the best in terms of physical comedy with Scrooge hilariously being helped by Cratchit to climb up and down a vertiginous chair and desk with high reaching rungs that also appear to be on wheels. Toby Park excels as Scrooge with an equally balanced performance from Sophie Russell as Cratchit, amongst others, but the chemistry between the whole cast would indicate they know each other well and each play to and off their strengths.

The cast are supported by a live trio of fantastic musicians, lead by musical director Ross Hughes, who perform throughout from a ceiling-height gallery suspended at the back of the stage. Heavy on drums but with keyboard and strings, music is an integral part of the show and lifts the production with some surprisingly rousing numbers including Radiohead’s ‘No Surprises’. This is sung with obvious irony by a choir who appear at the end of the first Act.

The ghosts of Christmas past, present and future adhere to the original message on Scrooge’s journey to find his Christmas spirit, however his first employer Mr Fezziwig appears as a Cuban drug Lord in a pink Cadillac with a huge cigar and there is a strange, albeit fabulous, ice-skating segment that defies explanation. Spymonkey attempt a great deal and mostly pull it off. There are a couple of hat changing items too many for my liking and at two hours twenty they can afford to cut back a little. The second half is a tad slow and repetitious, although the energy is high throughout.

It’s an irreverent take on an old favourite that will have people talking for some time afterwards and a refreshing performance style that will be new to many in the audience. It’s energetic adult entertainment with just enough audience participation and political references to satisfy the festive seeking crowd without descending into pantomime. A great alternative to tempt theatregoers seeking a fun experience without having to ‘Look behind you’.