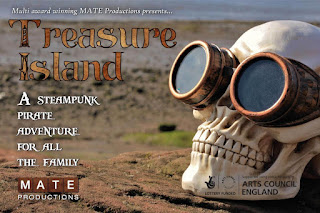 Produced by MATE Productions, Phil Willmot’s adaptation of Treasure Island is billed as ‘A steampunk pirate adventure for all the family’. An ensemble cast of twenty-one in futuristic 'Victorian' styled costume and an array of fantastic prosthetics, designed by Jane Allen, and swashbucklers sword-fighting their way through the two-hour production.

The story unfolds in a local tavern, run by Carmel Skelly playing a blousy but fierce Meg Trueblood, as young orphan Jim Hawkins, played admirably by Clay Travis, relates his tale of coming into possession of a treasure map to an enthralled motley crew. Unbeknownst to the gullible Jim, but clear to everyone else, they are unemployed pirates. Jim has been charged by the richly dressed Lady Jaqueline Trelawney, played wonderfully by Cassie Richardson packing a posh voice and a flintlock pistol, with the task of hiring a ship’s crew to man an expedition to recover the treasure on the understanding that they do not discover the purpose of the voyage. Julie Ashurst as her contrasting oldest friend, dressed in dull grey, Miss Lucinda Livesey provides great humour and a cover story for the expedition with her interest in wildlife and butterfly collecting in particular. The ‘stuck up’ Captain Smollet ably portrayed by Lee Clotworthy, in full golden breeches, frock coat and powdered wig, has already been hired by Lady Trelawney as the superstitious sailors believe all women to be bad luck onboard a ship and a female captain is unheard of. Too late for young Jim the secret is out and the pirates sign up to sail to Treasure Island with a secret mission lead by the glorious one-legged Long John Silver (Francesco La Rocca) to steal the treasure for themselves.  The story is as much about Jim’s coming of age as anything else and Clay carries the part like a true professional.

The production stopped by Prescot Woodland Theatre early on in its journey through a number of Merseyside public garden venues on its way to the Edinburgh Fringe Festival.

‘Ahoy me Hearties’ could be heard on approach to the square in front of the ancient Prescot Parish Church, bedecked with skull and cross-bone bunting, where children and families from babies to grandparents gathered mostly in full pirate costume. The buzz and excitement all the more inflamed by the pirate cast coaxing even the most timid of children to rattle a sword or smile at the offer of a swig of rum. Black eye-patches and bandanas could be bought at a reasonable price from strolling pirate vendors for those who didn’t receive the dress code. Suitably attired and ominously on the toll of the church clock the well-armed audience were lead down a pathway to what can only be described as a community theatre masterclass.

The setting was magical. A clearing beneath a gnarled oak tree with arched branches spreading over eight metres wide formed a natural amphitheatre with large comfy canvas camping chairs set in an arc on an incline. Large picnic blankets set in front allowed younger children to sit and be fed snacks and drinks throughout from an arsenal of goodies brought by the well clued up families.  The seating faced a staging area of a magnificent wooden plinth with several stepped levels representing a ship and an inn. Once the last few wheelchair users from the local care home were wheeled in from another woodland path we were underway with a rousing opening song and dance routine from the whole pirate cast. This all took place in clouds of smoke as the smiling pirates took the place by storm. Billed as ‘explosive percussion’, under the direction of Taran Harris (who between him and his wife composed all the music too), saw Franciso Carresco, drummer extraordinaire, mainly drumming with sticks, of anything and everything to hand, on wooden crates and bits of set. It is safe to say that it was loud and effective. The audience was captivated from the start.

Every actor fully engaged with the performance, staying in character and maintaining their voices throughout. Kristian Lawrence portrayed a convincing role as both Blind Pugh and Ben Gunn.  Holly Blue as the flashing, feisty would be first female captain Shashka Dimitri handled her frequent sword skills brilliantly but the two animal impersonators; Taran Harris as the literally barking mad Black Dog and Ryan Noone who operated and provided amazing voice work for the parrot Captain Flint almost stole the show. Aimee Maria played Nightingale Nell with a sweet soprano voice full of promise of much more to come from her. The choreography by Beverley Norris Edmonds worked exceptionally well with a lively sail-raising song and dance and a big finishing number that had the audience singing and clapping along. Full credit to MATE’s Artistic Director Gaynor La Rocca who produced Treasure island and to the cast and crew for great family entertainment. The six months of rehearsals fully paid off.

I would highly recommend pre-booking for Treasure Island as it tours this summer.
MATE Productions is a theatre and community arts organisation based in Knowsley, Merseyside, established in March 2000.  The company is leading the community engagement programme for the Shakespeare North Trust; the organisation building a commemorative Shakespearian theatre in the heart of Prescot’s historic town centre.