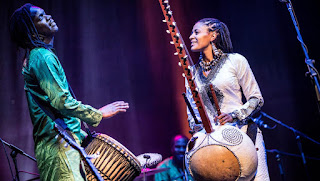 Knowing absolutely nothing about Jobarteh or her music, and with the absence of any programme or information at the venue, I sat listening to her 90 minute non-stop concert, at first with interest, but as the time went on, my interest waned considerably since all her songs were in her native language, even when she announced the titles, the only one I am positive I am correct in, is the song entitled, 'Gambia', and since the whole concert was mic'd to ear-piercingly loud levels, I was extremely glad when it had all finished.

Looking at her website, I find that she is indeed a very interesting person and something of a back 'icon'. There is a West African tradition of oral story-telling through music and poetry which is known as Griot, and these Griots are all male; the tradition and title being handed down from father to son through the generations. It is their practice also to play a Kora,  a kind of indigenous musical instrument which looks rather like a large  banjo played backwards and end-up, but actually has more in common with a harp, having 21 strings and these strings are plucked manually. Jobarteh is therefore breaking away from this male dominated tradition by taking her story-telling and music around the world as the first woman to achieve recognition in this instrument. She composes here own songs, plays and sings, and with her roots still very firmly in the rhythms, ideas, and customs of her West African heritage, brings her own personal messages and thoughts to a wider audience.

Her songs, she tells us, sing of love; lost love; in memoriams of special people in her life; the places, the people, the traditions, the smells of her homeland; women, and the struggles they face; or indeed any issue which ignites a passion within her.

This evening she was accompanied by four identically dressed musicians wearing light blue traditional smocks. One on a drum kit, one on African drums, and the other two on guitars. Many of the songs she sang this evening sounded remarkably similar; they all had a long musical introduction, they all had a simple repetitive 'chorus', and they all went at a similar tempo. Jobarteh's voice however is sweet and melodic. Even without understanding a single word she sang, she was very easy to listen to and, had she not been amplified so much, she would have been extremely pleasant and mellow.

For the repetitive choruses, we were all asked to sing along, and she 'taught' us the lyrics and tunes quickly and easily, and so we were abler to sing along (or even dance in the aisles as a couple did half-way through) to her rhythms - African-based rhythms and melodies with a distinct Western and modern twist.  One of these such lyrics which we were asked to learn sounded very much like "we all gotta pee" - I'm sure it wasn't but it brought a smile to my face nevertheless!

For one song she brought her young son (Siddiqi?) out to play what looked like a home-made xylophone. He was probably about 12 years old, and looked a little nervous, but he needn't have been - his playing was lovely and was given a deserved round of applause afterwards. The final 'drum-off' between the two percussionists was fun and clever too.

In conclusion, Jobarteh presents herself as an intelligent and talented woman, forging a career firmly rooted in the soil of her forefathers, but bringing that tradition bang up to date. Her passion for this, and her musical ability are undeniable and, had I been able to both understand and listen properly without my fingers in my ears continuously, it would have been a far more enjoyable experience than it actually was.