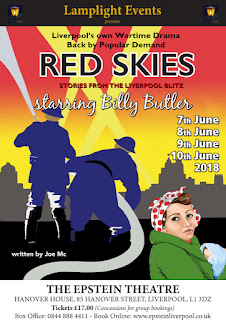 Starring Billy Butler, Red Skies tells the story of the Murphy family and their friends as they struggle for survival during the Liverpool Blitz amidst tears and laughter. Tears as they lose family and friends to the horrendous bombing. Laughter as they try to outwit the ration system with local spiv Joey who always has his eye open for the main chance or as Lizzie likes to put it ” Rob the eye out yer head that one then come back for the socket."

The lovingly restored Liverpool’s Epstein Theatre plays host to this wartime saga written by Merseyside writer Jo Mac in honour of her Nan. It was first performed in 2011 as part of the 70th anniversary of the 1941 May Blitz. The most bombed city in the country outside of London, Liverpool’s docks and railways were prime targets for the Luftwaffe’s high explosives and incendiaries and the play centres on the 1940 intense bombing of the city ending with the three day ‘Christmas blitz’. The bombings were largely played down by the government for security reasons so it is a story worth telling and should appeal to a wider audience outside of Liverpool. Only history will remember and it is commendable that the cast are made unaware of these facts as they play out their everyday lives in the thick of the action. A nod in reference to the ‘Brown shirts’ acknowledges, ‘Only history will tell us who really protected Hitler’.

Red Skies opens with a bare set of a large barley twist gate-legged dark oak table, heavy chairs and a huge period transistor radio and you could be forgiven for thinking from the flyer that this is will be a group of people sitting around drinking tea while exchanging wartime anecdotes. It is in fact a huge ensemble cast of eighteen actors who enthusiastically shuffle, sing and dance their way across the seemingly unaccustomed Epstein stage. The play originally ran at the much smaller and intimate Liverpool Unity theatre. Scenes were short, coming as quick and often at times as the bombs themselves. Each scene introduced new characters and new stories. The interminably long blacked-out changeovers benefited hugely in the second half from the accompaniment of 1940s music. The low-tech use of grainy still photographs projected onto a back screen, served throughout to depict scenes from air raid shelters to kitchens to bombed streets and seemed an unnecessary distraction from the dialogue at times.

The play opens with the colourful ‘Spiv’ Joey who introduces us to rationing and his gift for looting bombed shops which we find out in due course darkly extends to looting from bombed houses. He is also in love with a girl who is not interested in him and his hapless attempts to woo her, finally with nylons and candy, provide some much-needed lighter moments. Strong female roles throughout gave a good flavour of how hard the war was fought at home as well as on the frontline and the ensuing casualties were inevitable as the bombs whizzed down on women and the remaining children, whose parents refused to evacuate them, protected only by the ‘corrugated roof’ of a flimsy air raid shelter.

The Home Guard with their casual sexism was well represented and a scene between three soot-soaked firefighters getting to know each other and raising a toast with ‘secret family recipe’ hooch was very touching. The two youngest actors portrayed sibling affection with ease and the beautiful rendition of Emma’s ‘A Nightingale Sang in Berkeley Square’ was so haunting it was quite rightly repeated. The two brothers, sailors on leave, played off each other nicely but the brave solo attempt at a big band number would have been better left at sea. Mary’s singing in the final air-raid shelter scene was a surprise bonus with the ensuing ‘knees up’ giving a good sense of cameraderie and nostalgia.

Themes of love and loss were prevalent but the play also focusses on human frailty, domestic violence, women’s issues, class and changing society. The language is for the most part very real and has its fair share of expletives (mostly by the women) but only in context.  It attempts a great deal, perhaps too much and there are too many inaccuracies for Red Skies to stand up to close historical scrutiny by Liverpool Blitz experts although the audience gave enthusiastic applause at the end.

Whatever feelings the story telling, passed down through generations of Liverpudlians, may or may not have stirred you are left with an undeniable sense of what Winston Churchill called, ‘the spirit of an unconquered people’ in a city still showing signs of the blitz nearly eighty years later.