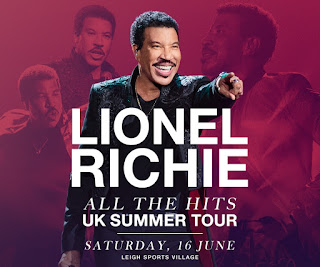 Imagining Grammy award winning US soul legend Lionel Richie in a northern ex-mining town was more like a joke punchline than a fact;.but thanks to Leigh Sports Village and the precedent set by Elton John’s 2014 concert, this anachronism became a reality. Nestled equidistant between the two major cities of Manchester and Liverpool, Leigh Centurion’s stadium is an ideal location, boasting excellent facilities and a concert capacity of 17,000. So “Lionel Richie in Leigh” made absolute sense and lived up to all the anticipation.

On entering the venue, the huge stage dominated the stadium and it was very clear that there wasn’t a bad seat in the house. Seven giant screens behind the band were used to project close ups of the performers and the crowds throughout the night. It wasn’t showy but it really made the most of the stadium setting.

Warming us up for the evening was the aptly chosen Shane Filan, of Westlife fame, who described the experience as ‘an honour to be able to warm you up for one of my idols…my biggest hero’.  Having been a huge Westlife fan back in their heyday, I was sad to see Shane reduced to a mere support act, but he was brilliant. His cheeky Irish charm shone through his half hour set, and he did exactly what he set out to do. Finishing with the anthem-like ‘You Raise Me Up’, Filan had the entire stadium singing along and we knew we were in for a good night amongst a friendly crowd.

At 8.35pm Rtchie appeared, wearing a white sequinned two-piece jacket and trouser combo, befitting an international superstar. Despite the glitz and glamour of his appearance, one thing struck me about him from the outset: his humility. He seemed to be able to make us feel like we were allowing him into our home and how grateful he was for the opportunity. The crowd went absolutely wild for him and he looked genuinely touched.

The tour is called: ‘All The Hits’ and the show did exactly what the title suggested. Performing for a full 90 minutes, it felt like he was taking requests from the audience and playing our favourite songs just for us. Starting with The Commodores classic, ‘Easy’, the crowd were won over from the opening bars. The best loved songs continued as he covered ‘Endless Love’, ‘Hello’, ‘Dancing On The Ceiling’ and finished with the 1985 US charity hit song, ‘We Are The World’.  Richie thanked us and paid tribute to his friends and collaborators who are no longer with us, from Prince to George Michael, David Bowie and Michael Jackson. Again, proving what a nice man he really is and how much distance his career has covered.

Richie’s warm sense of humour was apparent throughout with his jokes about our British summer, comparing our 27ºF temperatures with his 100ºF California climate. He wryly observed that his music rekindled the youth of his older fans, sharing nostalgically that his music wasn’t just songs but ’…memories of who you were, what you were doing and who you were doing it with.’  It was such a true statement about why we love his music so much and the place he has in his fans' lives.

This is one classy show which I’m delighted to have witnessed. There are five more UK dates until he returns to his Las Vegas residency at the Planet Hollywood Resort and Casino. I seriously suggest you grab yourself a ticket if he’s playing near you, it’s just a wonderful night of dancing on the ceiling (sorry but that had to be said!). So, with four Grammys, a Golden Globe and an Oscar under his belt, Lionel Richie’s career still seemed sorely lacking of something, but now it has been accomplished, and this wonderfully talented star can finally boast that he has played Leigh!

Thanks Lionel, come back soon!